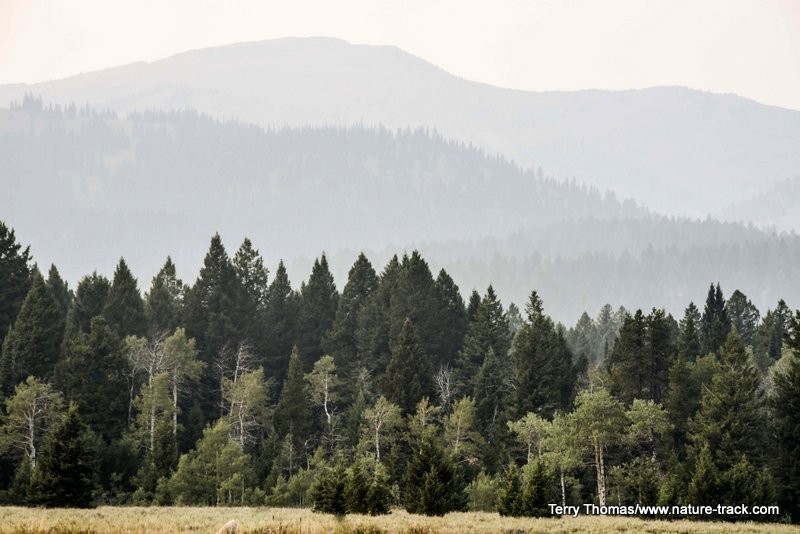 Smoke from California fires shrouds the Centennial Mountains in Island Park, over 700 air miles away.

For over an hour, the large campfire covered me in smoke, chasing me no matter where I moved as I tended the flames. Finally, as the fire burned to glowing embers, the smoke was gone. I set my grill above the coals and when the metal was hot, tossed on the hamburgers that would be our dinner. The meat sizzled and fat dripped onto the orange glowing embers, creating puffs of smoke, but nothing like when the fire was fresh and consuming the logs.

We love camp fires, but anyone who has ever stood near one recognizes that at times the smoke is thick and choking. During the past week, the huge campfire called California, has been putting smoke into our air—enough to cover parts of ten western states as far east as west Texas. In places, the smoke has been as thick as morning fog rising over a river, obscuring scenic views and creating a potential health risk for those with compromised cardiovascular or respiratory systems and the very young and elderly.

Wildfires have been a part of nature since at least the Ice Age and smoke, one result of fire, is as natural as plants, animals and air.  Smoke is the result of the incomplete burning of the fuel source. According to the US Forest Service, “smoke is made up of small particles, gases and water vapor. Water vapor makes up the majority of smoke. The remainder includes carbon monoxide, carbon dioxide, nitrogen oxide, irritant volatile organic compounds, air toxics and very small particles.”

Smoke has different qualities depending on the type of fuel that burns. Virtually everything contains water but green vegetation is loaded with it and even dry vegetation has a substantial amount. In a wildfire, burning of hydrogen rich fuel like this results in white, cloud-like smoke. If the smoke takes on other colors such as yellow or red, it means other things are burning.

The burning of manmade materials can produce smoke that is far more toxic than that of a wildfire. Dozens of hazardous compounds can be released from plastics, paints, treated wood, electronics and more.

A hot fire produces less smoke as more of the fuel is consumed. In the rare occasion that I have used an acetylene torch, I found that as I ignited the torch with a high acetylene to oxygen ratio, a black smoke would ensue. As I turned up the oxygen the heat would increase and the smoke would disappear. I found the same to be true with a campfire. If I used my electric air mattress inflator to blow on the coals, I could increase the heat of the fire and reduce the smoke.

The nature of the smoke will change with the temperature of the fire. For instance, if the combustible item contains sulfur, a hotter fire will produce sulfur dioxide. The incomplete combustion of a cooler fire will form hydrogen sulfide.

We were in Grand Teton National Park a few years ago when smoke from fires to the north would completely obscure the Grand Teton just a few miles away. We heard one tourist lament, “I came all the way from London to see these mountains and there is so much smoke I can’t!”

Despite its impact on our lives, we should be grateful, that at least for now, it is the smoke and not the fire we have to deal with.