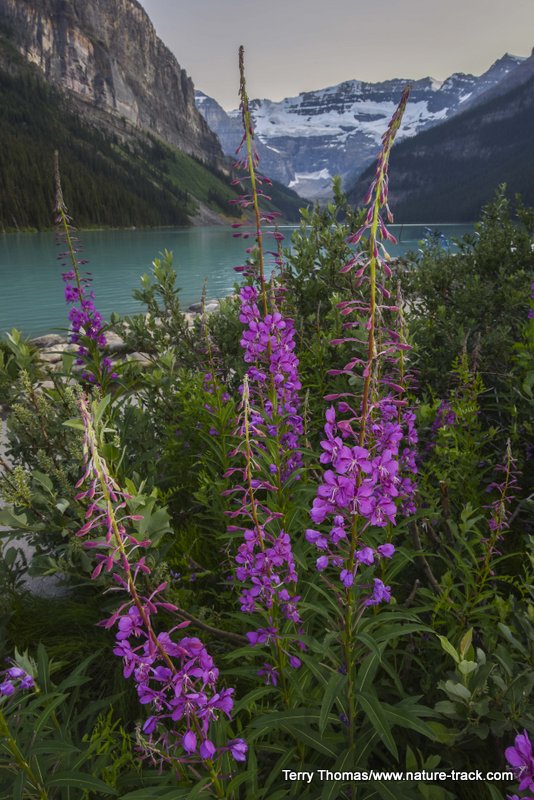 Fireweed stalks at the famed Lake Louise in Banff National Park in Canada, steal the show, just as they usually do any place where they grow.

I am usually too indecisive to ever claim to have favorites when it comes to nature. Often, my favorite bird happens to be the one we have just discovered, a phenomenon we have come to call Favorite for the Day. I am the same with wildflowers. There is so much more that goes into an experience than just the flowers that it is often hard to separate the emotions from the flower.

One wildflower though, has been in my top ten since I was twelve years old. That year, my grandparents took myself and two cousins on a month-long adventure up the then unpaved Alaska Highway, a trip I likely never expressed enough gratitude for.

It was 1969 and new fires were burning throughout the Yukon, turning the sky into a smoky haze. The previous years’ fire scars seemed ablaze too, but with a carpet of wildflowers we had never seen and it impressed even my distracted twelve-year-old brain.

Flower spikes over a foot long and full of magenta (a color description I learned many years later—I called them purple or pink at the time) flowers with contrasting white stamens waved in the breeze just like flames from a prairie fire. I was mesmerized by the seemingly endless blankets that, from the camper window, seemed dense enough to walk on.

At a visitor center, rare in those days, we quizzed a ranger about that awesome flower. He told us it was fireweed, a species of flower that is one of the first to pioneer a burn, initiating the sequence of forest succession.

I was reminded of that long-ago trip on a recent drive through British Columbia, the Yukon and finally, Alaska. Stands of fireweed brightened just about every turn of the road, colored hillsides and filled up recent fire-cleared forests, perhaps not quite like my memories, but enough to routinely elicit wide-eyed exclamations from my wife and me.

Fireweed is a native and thrives in most of the western U.S., Canada and Alaska. Fireweed is so named because of its relationship with fire and succession. The weed part of the name is unfortunate though, for there is nothing “weedy” about this plant. While it does form monocultures, it is not invasive and serves to prepare the way for other plants. It may only dominate a site for a few years before giving way to shrubs and other perennials.

On our current trip we have discovered another fireweed, dwarf fireweed, that isn’t as interested in burned areas as it is in recently exposed glacial soils and streams. This plant has the identical four-petaled flower about one inch across, but usually grows only a foot tall and flowers are individual, not on long stems.

Once fireweed has flowered, seedpods form, develop and dry. The dry pods split, releasing hundreds of tiny seeds, each attached to a feathery white tail that floats the seeds on even a slight breeze.

Blooming fireweed is an incredible mid-summer show in forests just about everywhere in the West. If that were all, it would be more than enough. However, in the fall, fireweed once again steals the show when its long, pointed leaves turn crimson, handsome enough that I included a close-up of a fall fireweed on my first Island Park calendar.

Fireweed will always remain one of my favorite wildflowers. Besides their unequalled beauty, fireweed reminds me of a long-ago trip and grandparents who cared enough to build a lasting memory for me.