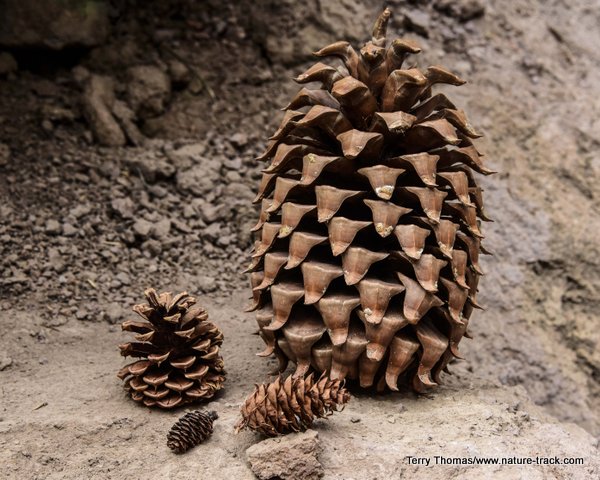 These are the cones of (left to right): ponderosa pine, spruce, Douglas fir and Coulter or big cone pine.

The pine cone was so huge that as I passed a garage sale near home, I could see it from the road. And I knew I had to have it. Best of all, this wasn’t really a sale, rather a large pile of items no longer needed or wanted by a rental cabin management company and the accompanying sign said, FREE. I jumped out of the car and snatched up the cone, fully ten inches tall and six and a half inches wide and weighing almost two pounds, and immediately went home to research its origin and give it a prominent place in my collection.

I had assumed that such a large cone must surely originate in some exotic place far from here. Turns out, however, that this is the cone of the Coulter Pine or Big Cone Pine, a species that grows in the coastal mountains of Southern California. It is also considered the largest cone in the world, sometimes weighing eleven pounds and up to sixteen inches tall when ripe.

Cones are often collectively called pinecones but more species than those of the pine genus bear cones. Firs, spruces, cypresses, redwoods, larches, redcedars and junipers all bear cones although they may vary markedly in appearance. For instance, a juniper cone looks like a blue berry but is really a cone.

All of these trees and shrubs are collectively known as conifers, or, “cone bearing”. They are also known as gymnosperms as opposed to angiosperms. “Sperm” means seed, “gymno” means naked and “angio” means covered. Conifer seeds are naked within the cone, not covered by a hard coat (ovary) or a fruit.

Conifers have both male and female cones, sometimes on the same tree. Male cones are quite similar across all species. They are small, herbaceous (non-woody) and last only a few weeks. They produce the pollen that fertilizes the ovules in the female cone. In Island Park, residents refer to pollen time as the Yellow Season. For about a month, conifer pollen can be seen blowing from trees and covering everything in fine layers of yellow pollen. Clean it up and it is back in a few hours.

Once the female cone is pollinated, it begins to develop with two seeds on individual plates called scales. Unlike male cones, female cones are highly distinctive between species and are often important in identifying them.

Cones vary widely in size, shape. Some, like my Coulter Pine cone, have heavy thick scales with sharp hooked ends while others are soft and paper-like. Those of the genus Pinus are the archetypal cones with woody scales and the classic egg-like shape. Pine cones also take the longest to develop—between 18 and 24 months with some species requiring 36 months to full maturity.

Pine cones, with their hard-shelled woody exterior, may persist on the tree for up to eight years. Fir cones, on the other hand, often disintegrate on the tree shortly after shedding their seed and may never hit the ground intact. Spruce cones, typically produced in the upper third of the tree, are papery, but drop to the ground at maturity and may be found in abundance there until they decay. Those of the giant, Western redcedar, are only half an inch long.

Cones of most other species ripen within six to eight months, completing their cycle in one season. However, many conifers, including spruces, firs and Douglas-fir, produce cones in a two-year cycle. Cone buds are produced in the first year and then cones develop and mature in the second year.

Pine cones, in particular, have one other use. They open and close depending on moisture levels. Dry conditions favor seed dispersal so cones, on the tree or on the ground, are more open during drier conditions and closed when moisture levels are high. That gives a crude indication of the moisture level of the forest floor and the current wildfire risk.