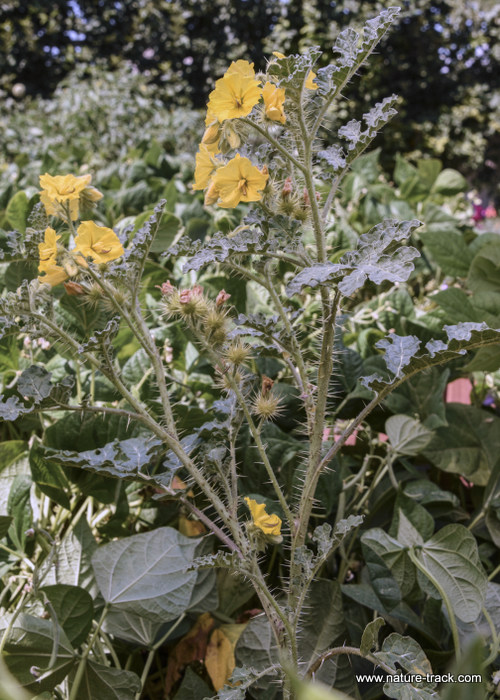 Buffalobur nightshade is a nasty native plant of the southwest, but has spread to every state in the Lower 48. If you find one, notify your county weed superintendent and carefully pull it up and dispose of it.

Among my wife’s green bean plants was a curiosity. As a young plant, it resembled watermelon leaves and Cathy was excited by the prospect of a volunteer watermelon. As it matured though, it became apparent that it was not a watermelon.

The stem grew and began to bristle with spines (actually called prickles, but that seems too benign. They truly are fearsome weapons). Large pretty yellow flowers, with one pollen anther longer than the others, bloomed. The flowers ripened into round spine-covered burrs suitable as medieval torture tools. No, this was not a watermelon.

As the plant matured, it looked more and more malicious and Cathy insisted that I pull it out. Before I did, she researched the internet for identification and I grabbed my camera for a couple of record shots.

Cathy’s research quickly led to one plant: buffalobur nightshade. The first thing we found about this very wicked looking plant is that, unlike many similarly armed plants, this one did not originate in Eurasia. It is native to the southwestern United States. It is very common in Texas where it is also known as Texas thistle, southern Arizona and northern Mexico. It fits in well in that region where it seems every plant has some kind of nasty armament.

It is also a very adaptable plant. While you won’t find it (yet) in Alaska and Hawaii, it is in every other state. It has made the short list of highly undesirable plants officially called noxious weeds in Oregon, Washington and Idaho. However, according to the latest map I could find, it has not been reported in Bonneville County—until now.

While Lady Bird Johnson Wildflower Center of Austin, Texas, claims the seeds are an important food source for quail, they state, “The prickles on this highly toxic plant help to discourage grazing by livestock.” Discourage? That seems like an amazingly mild word for it.

The toxic nature of this plant mentioned by the Wildflower Center comes from several factors. First, it is reported that the spines are coated in a substance that irritates the wound long after the spine is removed.

The second toxin relates to the fact that this plant is a member of the nightshade family. This family includes economically important plant such as tomatoes, potatoes, eggplant, bell and chili peppers and tobacco. Many contain alkaloids though, that may be toxic even in low doses. For instance, eating the leaves of potatoes as greens sickened the British royal family before their chef learned to throw the leaves away and eat the tubers.

How this plant ended up growing among our beans is a bit of a mystery. Buffalobur is an annual that forms a “tumbleweed” at maturity dispersing seeds as it rolls along. I am certain that no such tumbleweed has ever entered my garden. So, I must suppose that it was a stowaway among the bean seeds.

It is gone now, and we are wiser. We realize that just because it looks like a watermelon and grows where watermelons have grown in the past, looks can be deceiving. We must look past the obvious, and see if there are spines ready to poke and poison.