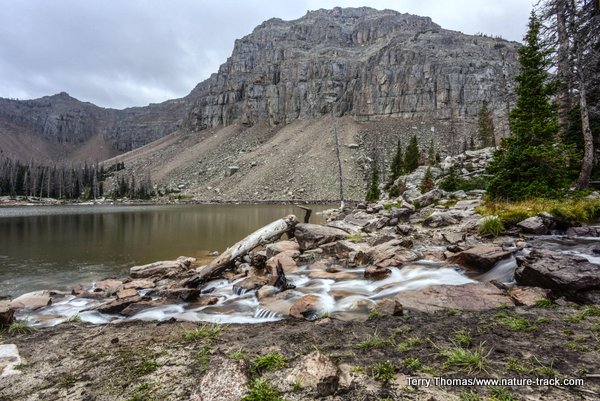 There were changes to an annual two-night trip to the Uinta Mountains in Utah. My energetic son wanted to make a 12-mile loop on the Notch Mountain trail with his four kids to help teach them that they can do hard things. I researched the trail and was dismayed to find it rated as “moderate to difficult”. That sounded a bit much for kids ranging from six to thirteen and one on Social Security. But I was committed to the trip and when I couldn’t talk Ben out of it, I determined to go. Mountains are unyielding and Ben might need help.

Rain plagued the day of our departure and empty parking lots at the otherwise busy trailheads were an indicator of just how substantial the weather had been. We could see fresh snow on Bald Mountain and Ben mentioned in passing that the Mirror Lake weather station said we could expect snow by ten p.m.

The temperature was already below 40 degrees when we started hiking and we could see high 20’s by morning. With our late start, we knew that we would not make the allotted three miles and resolved to camp at Clegg Lake about a mile and a half away. It was mostly downhill so the hiking wasn’t bad but the rain had turned the trails into fishable streams and keeping feet dry meant a lot of rock hopping, slowing us down even further.

We pitched camp in a snowstorm and I expected one very cold night. Ben heated some hot chocolate for the kids and they all crowded into a single tent for warmth and slept well enough. I was far more comfortable than I expected, due in part to a new pad that reflects body heat and a single large air-activated handwarmer. However, the wind gusted all night, condemning me to a fitful sleep.

In the morning, instead of the six inches of snow, there was only a skiff that was gone by 0900. The kids were warmed by a hot breakfast and we packed up and began a long day that saw us lose and gain about 700 feet of elevation over four miles. The kids did well and despite my misgivings, after some equipment adjustments they (and I) handled the hiking like pros with little complaining.

The day was terrific—clear skies, pleasant temperatures and fantastic scenery. After making camp at Ibantik Lake, the kids fished, explored and enjoyed a hearty freeze-dried dinner. Since fire restrictions were still in place, there was little to do when the sun went down and when the temperature dropped, we went to bed early.

That night, things changed. Wind gusted down off of Notch Mountain all night long attempting to rip our tents out from under us. At 0510, a pattering on the tent announced the beginning of rain. It stopped after an hour and soon I was up to see if I could photograph the lake. The black cloud hanging over The Notch, exactly where we had to go, looked menacing and soon Ben and the kids were up and scrambling to get packed up as the storm descended upon us. It was raining hard as we stepped away from camp. Nearing The Notch after an hour of steady uphill hiking in the rain, rain changed to hail and kids began to wail. Hands were cold, legs were wet, feet were soggy, kids were awash with fear that the trail and trial would never end. From the saddle, misty clouds obscured the valley below and thunder echoed off the peaks. It was a long 4.5 miles and the kids required a lot of encouragement to continue.

Once back at the truck though, the kids quickly recovered their spirits. They had survived physical discomfort and challenge and had done a hard thing, putting a little more steel in their spines. Sometime, somewhere, that steel will help them through some other hard thing. Unrelenting mountains had once again proven themselves as the best teachers.