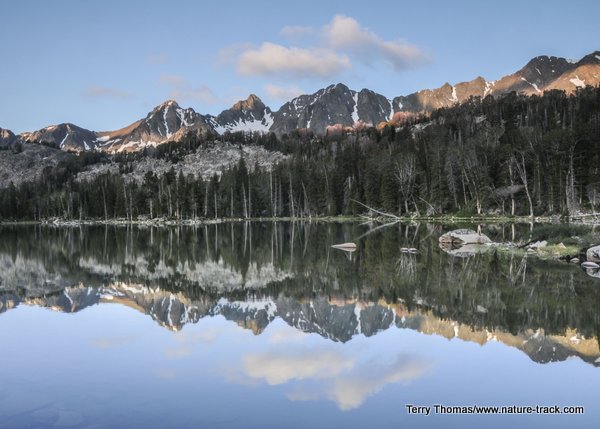 The Pioneer Mountain range has the highest average elevation of all the 115+ ranges in Idaho (Long Lake).

I’ve climbed mountains, but I am not a mountain climber. For the most part, my climbing has been occasional peak bagging in association with backpacking trips although I have specifically climbed Mt. Borah and the Grand Teton in my younger days. Deserts, coastlines, swamps and taiga all have considerable appeal, but mountains have always been my first love and the place where I feel most at home.

A friend was recently cleaning out her bookshelf and gave me a book, Idaho Mountain Ranges, that intrigued me. I started searching for more information about Idaho mountains and learned a lot. For instance, most, but not all, of the mountain ranges in Idaho are part of a great mountain range you might have heard of: the Rocky Mountains. This chain of mountains, the largest on the continent, is over 3,000 miles long, stretching from northern British Columbia to New Mexico.  Sadly, of the 100 highest peaks in the range, Idaho was left out while our neighbors, Wyoming, Montana and Utah all have at least one. Colorado has 78 of the highest 100 and even New Mexico has six of the 100.

The Rocky Mountain range has hundreds of subranges and subranges are often further divided into other distinct mountain chains. In Idaho, there are at least 115 named ranges according to the US Geological Survey (USGS).

Any mountains north of the Snake River Plain are considered part of the Rocky Mountains as well as the mountains along our eastern border with Wyoming around Soda Springs and south. Idaho Climbing Guide (idahoclimbingguide.com) recognizes 36 major ranges in Idaho.

The elevations of these mountain ranges, according to the USGS, stretch from the Chalk Hills of Canyon County with an average of 2,556 feet in elevation to...well it is not the Lost River Range where the tallest mountain in Idaho, Mt. Borah, and the next highest, Mt. Leatherman, reside. The range with the highest average elevation is the Pioneer Range of Copper Basin fame with an average elevation of 11,939 feet. The Lost River Range averages 8,783 feet elevation.

Elevation can be deceptive though. For instance, the Selkirk Mountains of Idaho’s Panhandle average only 5,331 feet in elevation. However, the general area is lower in elevation than Eastern Idaho. Bonner’s Ferry, the closest town of size, sits at 1,896 feet, or 3,400 feet below the average of the range. As a reference, the elevation of Idaho Falls is 4,705 feet and Mackay, the closest town to the Pioneer Range is at 5,906 feet. So, it is all sort of relative, although someone from Idaho Falls isn’t likely to suffer from altitude sickness in the Selkirks while someone from Bonner’s Ferry might find the air thin indeed in the Pioneers.

Probably the best-known mountain range in Idaho is the Sawtooth Mountains in central Idaho. The summit of the highest peak, Thompson Peak, in this incredibly rugged chain of mountains, is surprisingly only 10,751 feet. The entire range encompasses an area of 678 square miles with 57 peaks over 10,000 feet. Another 77 peaks fall between 9,000 and 10,000 feet.

Since mountain ranges were formed long before there were people on this planet, they don’t conform well to political boundaries. Idaho shares mountain ranges with Montana, Nevada, Oregon, Utah, Washington, Wyoming and Canada.

The view from the top of a mountain peak has always been worth the climb and I should have scaled more of them in my younger days. The old adage, mountains get taller and steeper as you get older seems to be true. There will always be other mountains to climb though and they won’t all be made of granite.