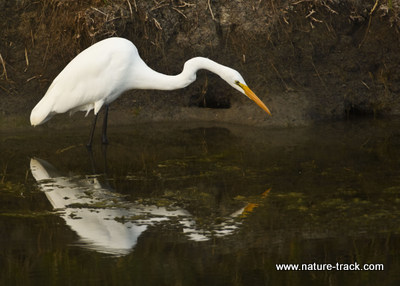 A hunting great egret, like this one at Market Lake WMA, is the picture of stealth and beauty.

Most birds are pretty, whether brightly colored or intricately mottled for camouflage. There are some birds though, that are really standouts. Painted buntings, golden pheasants and Mandarin ducks all come quickly to mind as exceptional, even for birds. There is another bird gracing the marshes at Market Lake Wildlife Management Area right now that can fit into that category as well: the great egret.

Rather than flamboyant colors, great egrets are large stately birds dressed in all white feathers forming smooth contours. The elegance is accented by long yellow-orange bills, yellow eyes and long slender black legs.  That is likely enough to be eye-catching just about anywhere they fly. However, during the springtime, they also grow additional delicate and showy plumes, called aigrettes, on their backs. The aigrettes are so stunningly lovely they nearly drove the entire species to extinction in the 19th century. Egrets were killed by the wagonload during the breeding season so their plume feathers could adorn ladies’ hats.

Great egrets almost never seem to be in a hurry. They are predators, but instead of chasing their food, they prefer stealth and stillness, waiting for prey to come to them. They will stand perfectly still, neck outstretched, bill pointed down and move forward almost imperceptibly until they see a potential meal. Then they strike with the speed of a viper.

Great egrets augment their beautiful lines with graceful unhurried flight. With only two wing beats a second their speed is deceptive as they can cruise at 25 miles per hour. They tuck their heads back creating a stylish loop in slender necks that rests on their chest. They seem to almost float on great white wings while the showy black legs trail straight out behind.

Once the slaughter of egrets was stopped in the early 1900’s, populations rebounded quickly. Great egret populations are now considered stable or perhaps even growing a little. However, most great egrets live on the east coast. As of 2006, Idaho had only about 26 documented breeding pairs. The closest breeding pair at that time was likely at American Falls Reservoir.

Besides the aigrettes, breeding rituals among great egrets are interesting. The male builds the nest, a huge thing up to three feet across and a foot deep. He then woos an interested female and remains with her through the breeding season.

Seeing a great egret in Idaho at any time is a real treat. If you see one in breeding plumage next spring, you will likely agree that it is one of the most handsome of birds.