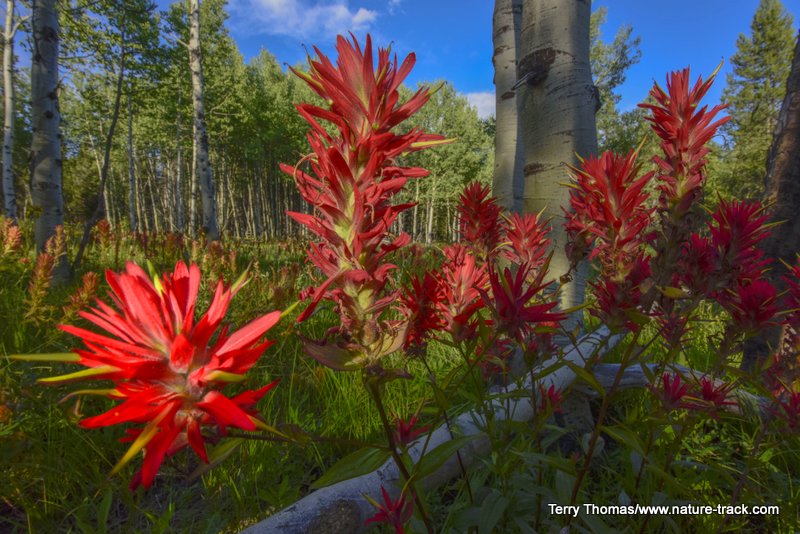 The story is told of a young Native American, Little Gopher, who, in a vision quest while striving to become a man was promised the ability to paint the vibrant colors of the sunset. Despite years of honing his skills, he could never find the colors he needed for the evening sky. One night he heard a voice advising him that on the morrow he would find the colors he would need to paint the sunset. When he went to his favorite painting place, he found paintbrushes sticking handle first into the ground, their tips dripping with paints the colors of a glorious sky. He painted the sunset and, in the morning, the people awoke to find a landscape full of reds, yellows and oranges as the paintbrushes had all turned to flowers. Little Gopher was thenceforth called He-Who-Brought-the-Sunset-to-the-Earth.

Indian paintbrush, the flowers of this story, bloom across much of the continental US, especially in the western states. In the drier, warmer areas of low country, the paintbrush show is a spring occasion. In the higher country, such as Island Park, Indian paintbrush is at its peak during the last week of July and the first week of August.

Indian paintbrush, also known as painted cup or prairie fire, is of the genus Castilleja, named after Spanish botanist, Domingo Castillejo. There are about 200 species in the genus. With that many species, you can expect a fairly high degree of variability and Indian paintbrush doesn’t disappoint. Indian paintbrush species range from small annuals to biennials to perennial subshrubs and thrive in habitats from deserts to alpine tundra. I have personally seen Indian paintbrush bedecked in red, orange, magenta, purple, yellow, pink and white. Depending on species, leaf shape can be variable as can the shape of the colored part.

Notice that I was careful not to say inflorescence or flower. That is because the beautiful colors that we associate with Indian paintbrush are not petals or sepals. The Indian paintbrush flowers are tubular, green and inconspicuous unless you look closely. The colors that we admire are actually bracts—modified leaves that are often associated with a reproductive structure such as a flower. The bracts in this case are usually shorter, wider and more lobed than leaves.

Trying to determine the actual species of a paintbrush plant can make seasoned botanists scream for mercy. They are highly variable within and between populations. Minute details must be considered, details best left to botanical specialists. Even then, Castilleja species hybridize easily keeping experts in high demand.

All paintbrush species are high on the list for pollinators. They don’t have stiff stems for perching so they attract hovering pollinators such as bees, butterflies and hummingbirds, all of which utilize paintbrush plants extensively.

Indian paintbrush plants are hemiparasites. They can and do photosynthesize, but they also send roots to lovingly intertwine around those of adjacent plants where they share nutrients. This doesn’t really impact the unsuspecting neighbors but it is critical to the survival of the paintbrush. This is the main reason it is difficult to cultivate paintbrush—they need a companion plant to survive.

I see a lesson in this seemingly bad habit of hemiparasitism. In order to provide us with soul filling beauty and keep pollinators buzzing, the paintbrush depends on the strength and support of neighbors. Perhaps we could all improve if we learned to trust and depend upon each other a little more.