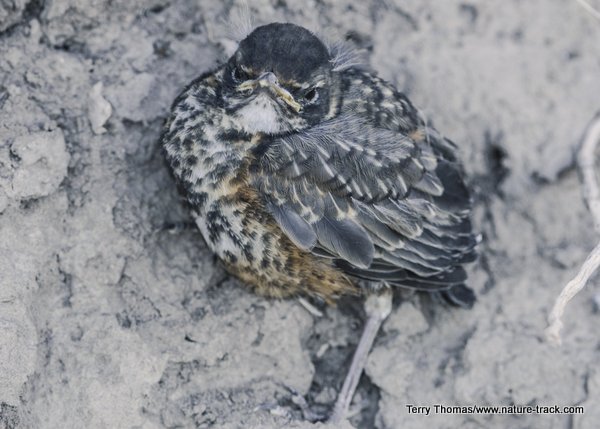 This young bird looks almost like a new species rather than the beautiful robin it will become.

When I heard the “thunk” outside on our deck, I groaned. Without looking, I knew that a bird had struck our window. I turned around to see an inert form lying on the picnic table. I walked outside and gingerly picked up the small bird. It was still alive so I looked around for someplace to set it down. In the meantime, I puzzled at what kind of bird it could be. It was perhaps slightly larger than a sparrow, had distinct wing stripes and a yellow hue on chest and rump. Its bill was longer than a sparrow and I finally realized that it must be a juvenile western tanager.

This time of year, it is common to see lots of youngsters of every sort almost to the point that it seems there are an abundance of new species. With some animals the juvenile looks like a small or gangly version of the adult. This is true with most mammals. Deer and pronghorn fawns and elk calves are losing their spots and are readily recognizable as junior versions of their moms. Before the marmots in my yard went back to sleep, the youths looked identical to the adults, just smaller. Offhand, I can’t think of a juvenile mammal that doesn’t look very similar to the adult by the time it is several months old.

This is a little less true in the reptile and amphibian world. Young alligators do look like alligators except for a difference in coloration. Young turtles look like adult turtles right from hatching. Snakes sometimes change color patterns between juvenile and adult phases. I recall seeing a juvenile cottonmouth snake in Georgia and marveling at the beautiful brown design. Later that day, I saw a large adult cottonmouth and it was jet black. Where there is the largest change is in frogs and toads that go through metamorphosis. A young frog or toad starts out looking like a fish then may, for a short time, have a tail which adults don’t have.

Birds, it seems, have the greatest variation between juvenile and adult. Coloration takes time to fully develop. For instance, it may take five years for a juvenile bald eagle to completely obtain the magnificent white head and tail of an adult. Other juvenile raptors look quite different from their parents, slowly growing into the adult coloration.

A friend from Texas recently sent me a photo of a dark colored bird, not black but rather, dark gray, asking for help with identification. I looked carefully at the bird and based on the bill shape and size, I suggested that it might be a juvenile common grackle but, honestly, it was hard to tell. Young birds tend toward the cryptic and identifying them to species can be a challenge.

In my experience, juveniles of birds where both parents have cryptic or plain coloration tend to look more like their parents more quickly. Ruffed grouse come to mind. Juveniles look like miniature versions of the parents as soon as they can fly.

However, juveniles of birds with colorful males will usually look much more like the female for most of the first season. As the young males start to develop their first adult plumage, they may look like nothing you have ever seen in a bird guide, falling between the adult female and male.

The young tanager that hit my window slowly recovered over half an hour and finally took flight. I think we both learned a lesson about identification: me about looking carefully for clues on young birds and he about looking for hidden traps such as windows.