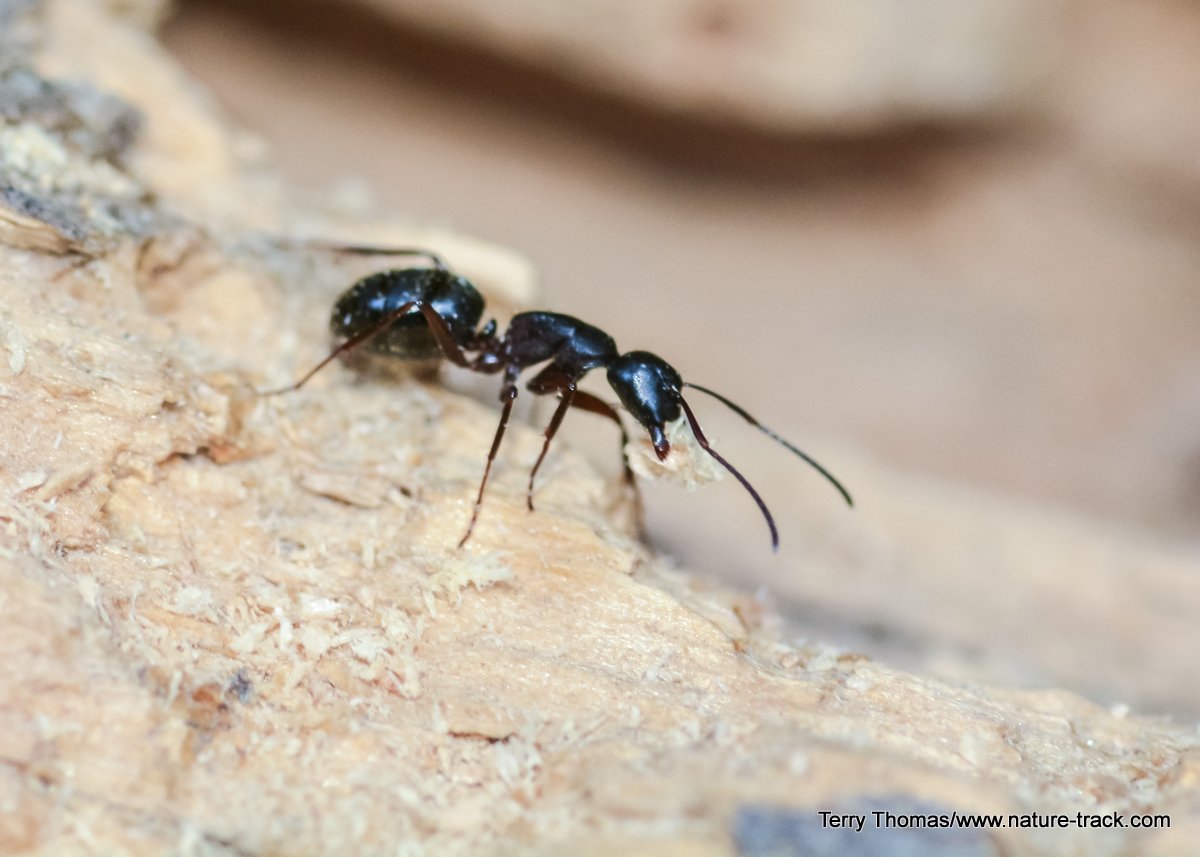 A carpenter ant is helping to hollow out the colony nest in a rotting log.

About a month ago, we seemed to be invaded with ants of several species. We would find them in various places throughout the house and piled up against the front door. Others in our community were complaining about the same thing, wondering what to do about it.

When our worlds collided inside the house, there was little mercy on our part. Knowing that some ants are fond of boring into wood, I was concerned that a satellite colony might establish itself in our framing or logs supporting our porches. I also thought of our friends in Houston, Texas, and the recent photos they sent of a recent tangle with tiny fire ants. Not pretty.

You can find native species of ants everywhere on Earth with the following exceptions: Antarctica, Greenland, Iceland, Hawaiian Islands and parts of Indonesia. They have been around for at least 150 million years, really flourishing after the advent of flowering plants. Currently, about 13,800 species of ants have been classified.

As a group, ants are wildly successful. They have adapted to most ecosystems and, although most are predators, have formed commensal, parasitic and mutualistic relationships as well. It is estimated that ants form 15-25 percent of terrestrial animal biomass. The late E.O. Wilson, Harvard professor emeritus who studied ants for his entire career, estimated that there are about one million ants for each and every person on Earth, with a total of between one and ten quadrillion ants (a quadrillion is one million billions).

Ant success is based partly on their highly eusocial society (Encyclopedia Britannica: Eusocial--of an animal species, especially an insect, showing an advanced level of social organization, in which a single female or caste produces the offspring and nonreproductive individuals cooperate in caring for the young). Give a colony of ants a pile of dirt or a rotting log and within a week, they will have a community and a below ground sky scraper or log-based cruise ship in ant dimensions. The secret is the division of labor—there may be workers hollowing out tunnels, soldiers defending the garrison, nursemaids caring for the helpless young, foragers bringing home the groceries, multiple queens intent on reproduction, queen attendants and more, depending on the species. In this caste system, it is the colony that counts, not the individual and being ant-sized is mitigated by numbers. And, according to Arizona State University, “Despite her size and royal title, the queen doesn’t boss the workers around. Instead, workers decide which tasks to perform based on personal preferences, interactions with nestmates, and cues from the environment.” Oh, and they are all female.

Ants are also successful because of their ability to change their habitat to suit them. Many species construct complex nests in the ground, in logs on the ground or in standing dead trees. Engineering solutions within nests that some species attain include temperature control, air flow, food storage and sanitation. Lemon ants sting and kill all the vegetation around a nest except for the lemon ant tree. Harvester ants clear away all vegetation from around the opening of their nest in areas large enough to be easily visible from aircraft. Carpenter ants tunnel through wood, turning it into dust. Thatch mound ants create huge piles of pine needles and build their nest within and below it. Overall, the incessant habitat modification means that they play a critical role in the natural circle of life, water percolation through soil and more.

As members of the same order as bees, wasps and hornets, some ants do have stingers. One, the jack jumper ant of Australia, is extremely toxic and can be fatal. Also, the most painful insect sting in the world is that of the bullet ant of Central and South America. It usually isn’t fatal, but you may wish you were dead for a while after an encounter. However, most ants use their formidable jaws for a painful bite and spray formic acid when threatened.

With so many species and behaviors, understanding ants is a monumental task. If you get the chance though, rather than stepping on them, take the time to watch for a while. You might be surprised by what such simple creatures can teach you.