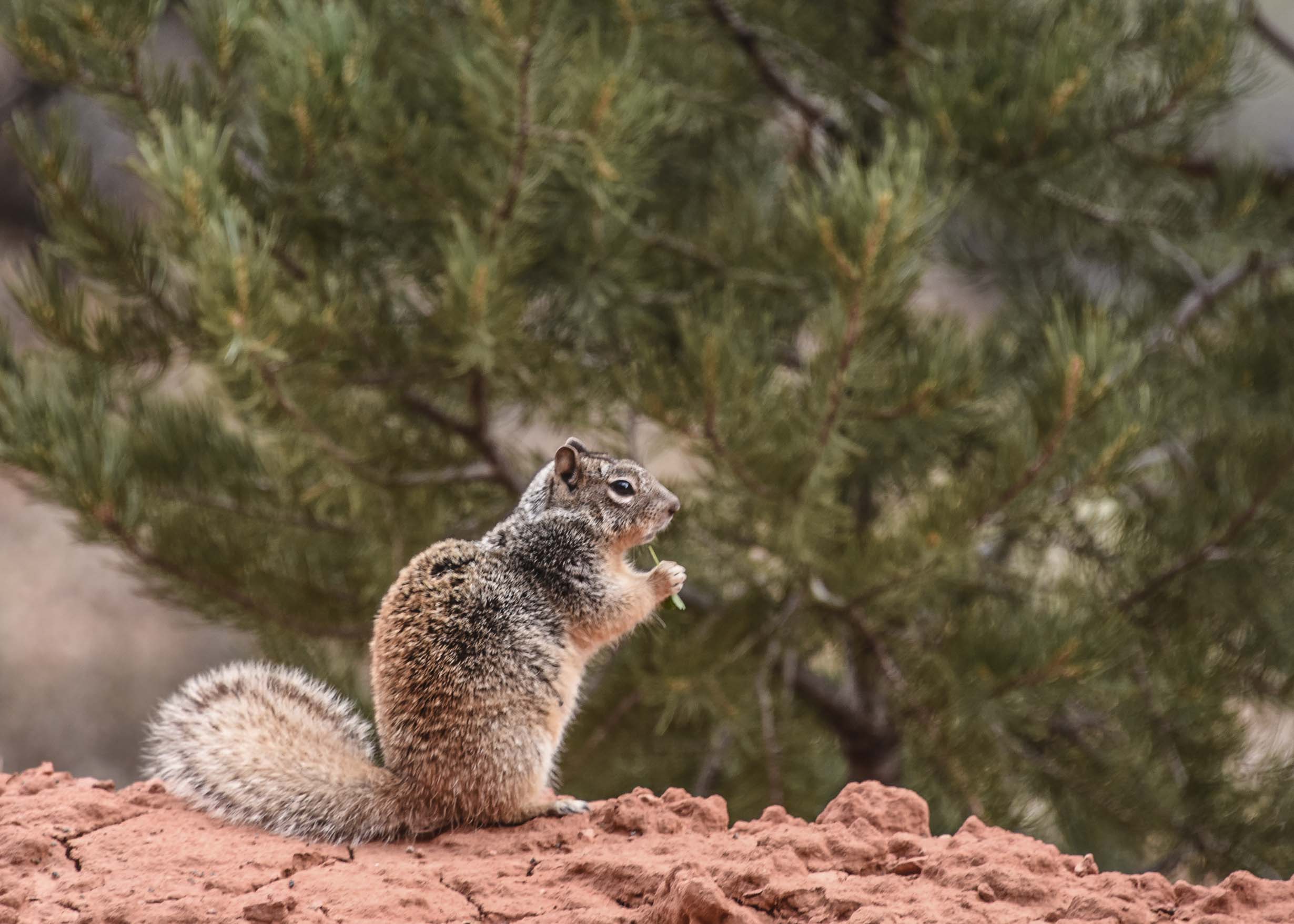 The rock squirrel, one of 13 species of ground dwelling squirrels in Idaho, can only be found in the extreme southeast corner of the state.

I went into the visitor center to play, “Stump Gretchen.” Gretchen was an affable ranger working the Q&A counter at Capitol Reef National Park. So far, she had been able to answer all our questions but this time I thought I might have her.

I described a ground dwelling squirrel, one I had never seen before, and asked her what it was. She was indeed stumped. Then she pulled out a reference book. No, it wasn’t any of the squirrels in that book. Then she consulted another and with triumph in her eyes, announced, “Rock squirrel.” Sure enough, there it was, a squirrel found only in the most extreme southeastern Idaho, but apparently more common in Southern Utah.

Include the hoary marmot we saw near Juneau, Alaska and we had added two species of Idaho’s ground dwelling squirrels to our life lists in nearly as many months. They just weren’t in Idaho.

In the Pacific Northwest of Idaho, Oregon and Washington, there are a total of 19 species of ground dwelling squirrels, not counting the distantly related chipmunks, of which there are eight species. With 13 species, Idaho has the most diversity.

In their role at the bottom of the food chain they provide nourishment for a wide number of predators. Snakes, coyotes, foxes, hawks, badgers and more all depend upon ground squirrel kin. As a side benefit of badger predation, the holes that badgers create when digging for ground squirrels later serve as homes for burrowing owls and rabbits.

Ground dwelling squirrels are also manic-depressives. During the four to five months of spring and summer, they are feverishly raising a family of 4-14 kits, while at the same time trying to put on layers of fat. They will need that fat to get them through the next 7-8 months of true hibernation where body temperature, heart rate and breathing all drop significantly.

Ground squirrels have suffered a lot since European settlement. They have been shot, poisoned and flooded to make way for other land uses. The longest lasting persecution though has been habitat fragmentation, creating isolated populations. Once cut off from other squirrels, gene flow ceases. Populations then also become far more susceptible to anything that can wipe them out such as weather events, fires or indiscriminate hunting.

Ground squirrels are a fascinating and important part of the natural world. A quick look at the list of 19 species in the Pacific Northwest tells me that the rock squirrel that Gretchen helped me identify is just the beginning of the squirrels I need to see. I will be reaching for my Guide to Mammals every time I see a ground squirrel.

That is embarrassing but actually a fairly typical response to my nature essays. Since The Best of Nature is created from the very best of 16 years of these nature essays published weekly in the Idaho Falls Post Register (online readership 70,000), The Best of Nature is a fine read. It covers a wide variety of topics including humorous glimpses of nature, philosophy, natural history, and conservation. Readers praise the style, breadth of subject matter and my ability to communicate complex and emotional topics in a relaxed and understandable manner.

To read more and to order a copy, click here or get the Kindle version here