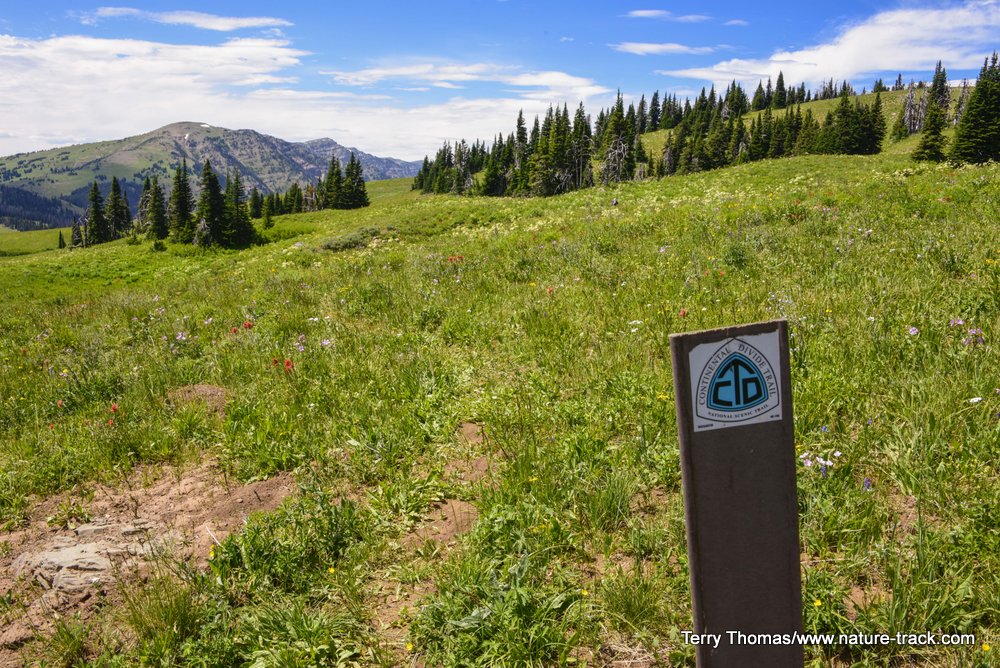 The Continental Divide Trail near Keg Springs in Island Park runs mostly on the Idaho side of the line but reaches a saddle about two miles from the trailhead where you can see Blair Lake, Montana. Follow the signs as the trail is often hard to see.

Three major hiking trails run the width of the United States. The oldest and most famous is the Appalachian Trail that runs from Georgia to Maine. The Pacific Crest Trail leads hikers from Mexico to Canada through California, Oregon and Washington. The acknowledged toughest and newest challenge though, is the Continental Divide Scenic Trail, or CDT for short. This 3,100-mile trail starts on the New Mexico/Mexico border and ends, five states later, at the union of Canada’s Waterton National Park and Glacier National Park, Montana.

The Continental Divide, is far larger than the continental United States. It stretches from Alaska’s northwestern coast to the tip of Cape Horn, almost a canoe paddle from Antarctica. This divide rules whether water will gather and drain into the Pacific Ocean or the Gulf of Mexico/Atlantic Ocean, or the Pacific and Arctic oceans at the northern extreme.

With such a noble purpose as dividing the waters of two continents, it might be expected that the divide is high and rugged. In many places that is the case. The highest point along the entire divide (in the continental US) is Gray’s Peak, Colorado, at 14, 278 feet, but the lowest point is at Columbus, New Mexico, the southern starting point of the CDT at 3,900 feet and looks little like the sharply divided mountains to the north.

In 1965, President Lyndon B. Johnson declared: “…I am requesting…a cooperative program to encourage a national system of trails, building up the…trails in our national forests and Parks. In the backcountry we need to copy the great Appalachian Trail in all parts of our country.” In 1978 the Continental Divide Trail became a reality.

The Continental Divide Trail is different from the other two super-trails in that it is only about 70 percent complete. There are many unmarked miles where you must choose your own route, travel on gravel or even paved roads and just plain wing-it. Much of the trail is marked with the distinctive CDT logo on sign posts even where a trail isn’t visible.

Hiking through, meaning traversing the trail from bottom to top or vice versa, is not a casual endeavor. The hike can take six months and cost eight pairs of shoes (experts recommend replacing shoes on the trail every 400 miles, requiring some fancy planning on the hiker’s part).

A northbound hiker enters Idaho from Yellowstone National Park in Wyoming and follows the divide, which is also the state line between Idaho and Montana, for several hundred very rugged miles. These must be frustrating miles for a through-hiker as there is little northward gain. The trail follows the Centennial Mountains and then the Lemhi Mountains west before turning north near Salmon, leaving Idaho at Lost Trail Pass for the final run through Montana—where it first swings back east to Butte, MT, before heading north again.

Getting to the CDT isn’t hard. Many roads cross the divide and the CDT including I-15 at Monida Pass, Highway 20 at Targhee Pass, Highway 87 at Reynolds Pass, the top of Medicine Lodge, Lemhi Pass east of Leadore and Lost Trail Pass on Highway 93.

Through-hiking the entire trail is beyond my capabilities, but I have hiked segments of the CDT at Red Rock Pass, on the Sawtell Peak road (trail to Lake Marie), from Keg Springs (all in Island Park), Divide Lake trail in Medicine Lodge and the trail to Aldous and Hancock Lakes above Kilgore. The Lemhi Pass area is next on my list.