Meadow Voles and a New Paradigm 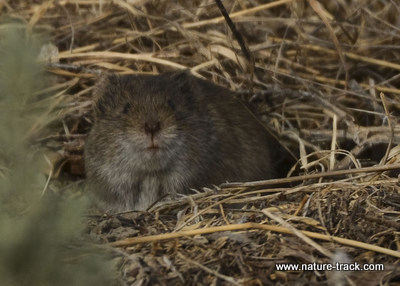 The meadow vole is an under appreciated keystone species that carries the weight of an ecosystem on its tiny back.

The farm store sign read, “Voles wintered well. Get your rodenticide here.” The salesman, sure that widespread use equaled acceptance, explained that over 20,000 agricultural acres in our area had already been treated with rodenticide to combat this clear and present danger. He assured patrons that the poison would only kill rodents even though the label clearly warned otherwise.

There is no doubt that meadow voles, small mouse-sized rodents with short tails and small black coals for eyes, wintered well. Their lawn tunnels and burrows are still apparent. Some areas with high vole activity feel like tilled soil underfoot. The stems of many shrubs such as rabbitbrush and sagebrush gleam bright white where voles had stripped their outer bark.

Viewed in this light, the tiny vole is a competitor with human interests, a double negative without redemption. However, those who remember their math will recall that two negative signs actually make a number positive. Could it be that our focus on vanquishing the meadow vole has blinded us to the positives?

Voles dominate their world, representing up to 40% of the small mammal community. They achieve this dominance through a reproductive strategy that that makes rabbits look like celibates.  One captive female produced 17 litters in one year for a total of 83 young. Her daughter produced 13 litters (totaling 78 young) before she was a year old. The potential of a rate of reproduction that high is staggering.

What keeps voles in check is the fact that virtually every predator in the system dines on them, making the average lifespan of an adult just over two months. The fortunes of great horned owls, long-eared and short-eared owls and harriers are firmly linked to those of the vole. Many other predator populations such as, weasels, foxes, coyotes, badgers, most raptors and a variety of snakes, are positively associated with meadow vole abundance.

The lowly vole carries much of the responsibility for sustaining an entire ecosystem on its furry back. Without its high potential for mass production, it could not maintain its essential role.

There is no hiding the fact that voles can be a nuisance and may even cause damage to ornamentals and crops that we hold dear. Populations can peak about every 5 years and sometimes these peaks can be staggering. In ideal habitat and at the top of a population spike, vole numbers may top 1500/acre. That makes for happy and healthy predators and worried farmers.

However, voles do aerate soils with their burrows, allowing water to percolate more deeply. They distribute seeds, fertilize with their urine and droppings and generally help to maintain the long-term productivity of the soil.

What we need is a new paradigm, a new way of looking at voles and, by extension, all wildlife. If we can shift our thinking from one of competition to recognizing we are all part of a larger and carefully balanced community where each member plays an essential role, perhaps we will all be winners in the end.