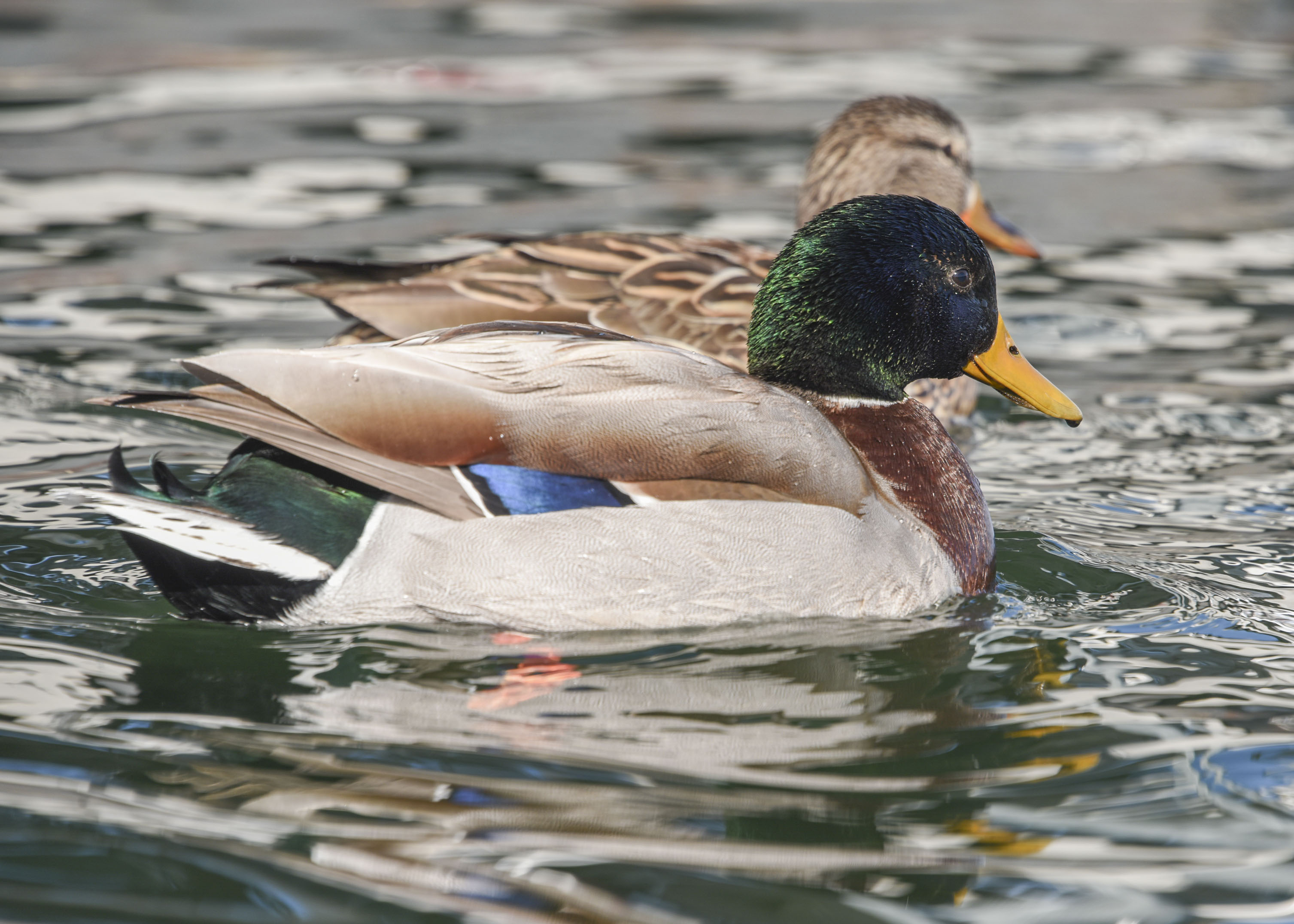 A drake mallard is a handsome fellow and deserves a closer look. Here you can see the blue speculum, the curled tail feathers and the difference between the male and female bill color.

Until I received a request for a digital photo of a mallard duck, I didn’t realize how few good mallard images I had. After all, mallards are so common, I assumed I had plenty of images to choose from. I suppose I have made the same mistake in the field. “Aw, just another mallard. I’ll get that shot later.” Carry that attitude to the reasonable conclusion and I had a file of almost nothing.

Despite handsome plumage that should be an ever pleasing eye-catcher, mallards are so common I suspect that many birdwatchers will also quickly dismiss them searching instead for more elusive and exciting subjects. I know I do that, failing to fully appreciate this adaptive and successful bird.

Oddly, it was a recent trip to the un-duck-like habitat of Lake Powell in Southern Utah that helped me get started on a more thorough mallard portfolio. A number of mallard and mallard hybrids live among the houseboats begging for a living. They were willing subjects, especially when rewarded with food and I took advantage of that.

The mallard is recognized as the most abundant duck in the world, breeding across Eurasia and North America and introduced into Australia and New Zealand. Mallards can also be found in urban parks virtually throughout the world. North America is the mallard stronghold though with a 2011 census estimate of 9.2 million birds.

Just about everyone can recognize a male mallard. A drake is a handsome bird with an iridescent green head and neck separated from a rich chestnut brown chest by a thin white collar. The sides and belly are a finely vermiculated gray to white. The back, rump and upper and undertail covert feathers are black, forming a distinctive black triangle when viewed from underneath with the birds in flight. There is one other thing that mallard drakes have that no other species possesses: black tail feathers that curl forward.

Females are a mottled brown throughout. Both males and females have a blue wing speculum, an area on the trailing edge of the wing between the body and the primary feathers, topped with a white line. The speculum is often only visible when the birds are in flight.

During the summer when drakes are in eclipse plumage, males and females look very similar. However, bill color doesn’t change and the yellow bill of the drake is quite distinctive from the orange bill mottled with black speckling of the female.

Mallards are so popular that over the millennia, they have become the root stock for most domestic duck species of today. That fact also means that it is quite easy for mallards to hybridize with domestic stock producing some very strange looking crossbreeds.

Waterfowl hunters are one group that does not take mallards for granted. The handsome mallard makes up about 35% of the ducks harvested annually in North America, far more than any other species of duck. Mallards also tend to be one of the tastiest ducks as well.

The longer I spend photographing a species, the better I come to understand and appreciate it. As I concentrate on building a more comprehensive portfolio of mallard images, my admiration for this bird will continue to grow. Familiarity, it seems, can also breed respect.