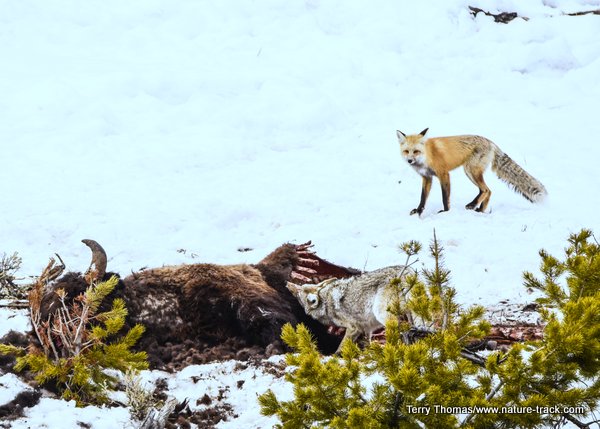 A fox cautiously approaches the bison carcass as a coyote feeds. Wolves had eaten their fill and bedded down on the opposite side of the ridge.

No one seemed to know how the bison died. Winter wasn’t over in Northern Yellowstone and it could have just been too much for an aging animal. Wolves could have hurried that process or they could have been the instigators of death for an otherwise healthy bison. Regardless, last week, across from the entrance to Petrified Tree, the animal lay dead about 150 yards from the road.

Such a treasure doesn’t go undiscovered for long. Wolves were on the carcass quickly and that, of course, attracted the human element. The roadside was quickly filled with people sporting long lenses and scopes mounted on tripods. Parking was limited and that was the only thing that kept the number of people in check. Park Rangers roved up and down the road ensuring that everyone stood outside the white line of the road and didn’t venture any closer to the bison and to motion curious drivers on—“No stopping in the road!” was the constant cry.

There were seven wolves—three with radio-collars—one almost black, four grays and three more of a brown color. Although they were as large as the adults, it was easy to see that two of them were pups from the previous season as they tussled playfully with each other. Their feeding was at times leisurely. Several would wander off, maybe chase hopeful coyotes, bed down for a time or check out the other side of the ridge. At times all of them would worry the carcass, pulling at the hide with tremendous jerks that moved the whole thing.

The entire carcass was disappearing from the ribcage back. The front end of the animal was a different story. Even the wolves were having a hard time penetrating the armor-like hide protecting the front shoulders and other than remove some of the hair there, that muscle was all still intact. Perhaps it would take a hungry bear, just up from hibernation to finish the job.

Ironically, as the wolves fed, two bison grazed not 200 yards away. Apparently, they felt secure in the knowledge that the sacrifice of their comrade would protect them, at least in the short-term, from the wolves.

When the wolves finally tired of the meal, they slowly moved off, bedding for the day on the other side of the ridge several hundred yards away. They might make an afternoon foray over for a quick bite to eat, but for now, it was time for a sound sleep.

Wolves weren’t the only animals interested in this great gift of protein and this was the break they had been waiting for. Literally within seconds, ravens and magpies swarmed the carcass. A golden eagle soared in from above to share in the bounty as well.

Coyotes slinked in from both sides. At one time, there were six of them, all tugging, feet braced and teeth set, in different directions, trying to render the carcass into small pieces to get at what was left. The coyotes were a nervous lot though, constantly vigilant for the return of a wolf or, heaven forbid, the entire pack. To be caught unaware was a death sentence.

Two red foxes came in to share the bounty as well. They were just as anxious as the coyotes, but they had to fear the coyotes as well as the wolves and even the eagle was a threat. They were determined though and filled up on bison.

All in all, this one carcass fed many animals for a week. A bear will eventually claim what is left and continue to benefit from it. Nature is seldom wasteful, and in death, this bison continued the circle of life for others.