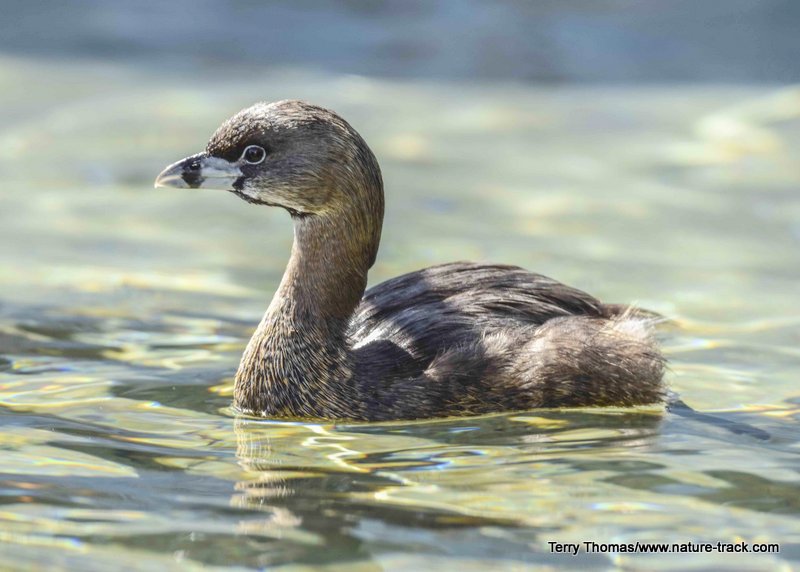 The pied-billed grebe isn’t going to win any beauty contests, but it is supremely adapted as a diving bird.

With the marshes across the southern part of the state escaping their rigid ice bonds, waterbirds will be returning soon. Among the superstars such as Canada geese, great blue herons, night-crowned herons, pintails, egrets and more, there will be a small brown bird. As it swims and dives among the newly growing cattails, it will be inconspicuous as it is also rather nondescript and unassuming.

This bird is a pied-billed grebe, related to more flamboyant grebes such as the eared grebe and the Western grebe. As a grebe, it is a diving bird that forages for most of its groceries underwater. Like other grebes, the pied-billed grebe’s toes are lobed not webbed like those of a duck.

Diving also requires that its feet are placed far back on the body. In fact, the Latin genus name for “grebe” means “feet at the buttocks”. Because of this specialty, grebes spend little time walking on land.

Another characteristic shared by grebes is that they eat copious amounts of their own feathers. Sometimes up to half their stomach contents is their own feathers. This is believed to serve two purposes. The first is to provide a sieve-like plug at the entrance to the intestine which prevents sharp objects from entering the gut. The other is to encapsulate indigestible matter so it can be disgorged as pellets, much as an owl does.

Unlike most other grebes that have intense red or yellow eyes, the pied-billed grebe’s eye is dark. Its bill is also different. Instead of a pointy, almost delicate looking bill, the pied-billed grebe has one that resembles a wedge. It is stout and thick, much more like the bill of an American coot than, say, a Clark’s grebe.

The pied-billed grebe is smaller than a coot but larger than a robin, and is mostly brown/gray. During the breeding season, they give in to fashion just a bit when the adults form a black vertical line around the ivory-colored bill and the throat and top of head darken. Juveniles will have stripes on the face.

It isn’t looks that will get the pied-billed grebe noticed though. They have one unique behavior that sets them apart from most diving other birds. Pied-billed grebes have the ability to control the amount of water in their feathers.  This gives them great control over their buoyancy. They can, alligator style, submerge until just their eyes protrude from the water, “crash dive” straight down, swim just beneath the surface or dive to the bottom all by changing the amount of water their feathers hold.

Pied-billed grebes are surprisingly common, the most common of the grebes. You will find them in most marshes across the country. They tend to hug the edges of the vegetation where they feel the safest and will dive to avoid predators rather than take to the air with their laborious running take-off.

Pied-billed grebes could be the poster kids for the cliché, don’t judge a book by its cover. They aren’t the most beautiful of birds on the outside, but like Napoleon Dynamite, they’ve got skills.