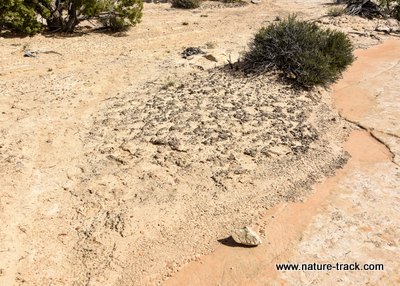 Trails on either side of the dark microbiotic crust in Southern Utah demonstrates the value of microbiotic soil crusts and what happens when careless trampling crushes them.

To a farmer, a soil crust is a condition where, like the top crust on a cherry pie, the soil forms a thin but almost impenetrable layer, either chemically or physically. It is harmful in that water may run off instead of filter down and tiny emerging seedlings may not have the strength to power through the crust.

There is another type of soil crust though, one that has many names: cryptobiotic, microfloral, cryptogamic, microphytic and microbiotic; all names that describe features of the crusts and refer to a complex formation of fungi, cyanobacteria, lichens, algae and bryophytes growing together on or just below the soil surface. As the science surrounding these micro-communities has evolved, scientists have gravitated toward the name microbiotic as the most descriptive and accurate term.

In healthy rangelands, microbiotic soil crusts are often abundant. At least one study determined that 70-80 percent of the living cover in some areas consists of these living crusts.

It stands to reason that something this common is an integral component of the environment. Research has demonstrated that microbiotic soil crusts aren’t just a curiosity, a chance amalgam of organisms that may benefit each other but serve no real ecological purpose. Wherever they occur, crust communities are key to maintaining healthy rangelands.

Arid and semi-arid rangelands are different from grasslands. Rangeland plants grow in clumps with significant space between plants. This makes better use of scarce water but leaves a lot of bare soil potentially subject to wind and water erosion. Microbiotic crusts stabilize the soil between plants, thwarting erosion. Some even secrete polysaccharides which essentially glue soil particles together.

Keeping soil in place is just one function of a microbiotic soil crust. These crusts may fix nitrogen, which means that they can literally make soil nitrogen out of thin air, providing this essential nutrient to other plants. That is just the beginning. Microbiotic crusts are also photosynthetic when most plants are dormant adding additional organic carbon to the soil. Research has made it clear that soils with intact microbiotic crusts have  higher organic material, more plants, a wider variety of species of plants and plants with higher nutrient content than soils where crusts have been heavily damaged or removed.

One of the best things about soil crusts is their inherent ability to keep noxious invading plants like cheatgrass and medusahead rye at bay. Native plants that evolved with microbiotic soil crusts often have developed mechanisms that allow their seeds to penetrate microbiotic crusts but invasive species may not have that advantage and their seed may sit on top where it can’t germinate.

These microbiotic crusts are tough characters, adapted to some pretty nasty conditions. What they don’t tolerate is crushing, whether it is by livestock feet, ATV or bicycle tires or hiking boots. Once damaged, crusts may be able to bounce back, at least in appearance, in as little as five years. To reach full functionality and a complete complement of species may take up to 250 years.

Microbiotic crusts have taken a beating over the past 150 years as human activity has trampled them under foot and wheel. We can’t hope for a better yesterday but we can change the future by being more respectful of this important community in the environment.