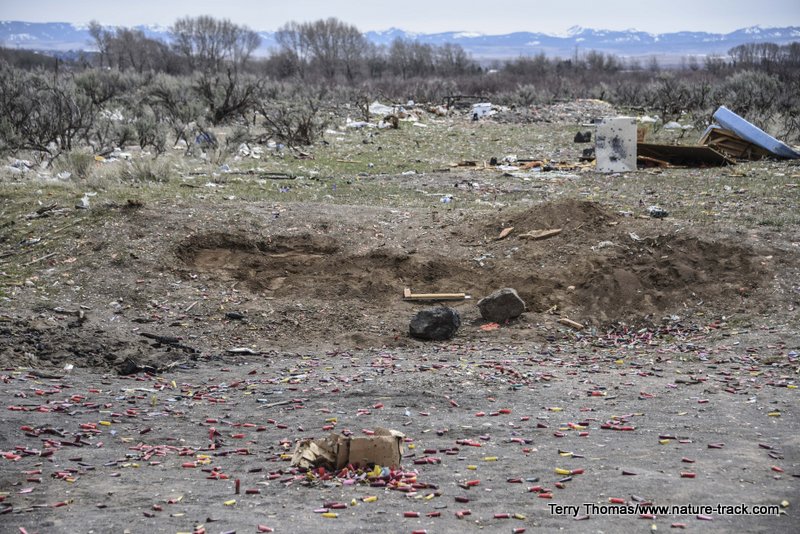 Along the road to Cartier WMA, are several areas where target shooters have created an unsightly mess with their litter. It may come as a surprise to some to learn that shotgun shells are litter too.

Many years ago, when I wore a badge, carried a gun and drove around in a truck belonging to Idaho Department of Fish and Game, I spent many days walking up and down river banks checking fishermen. I was appalled by the amount of trash I found everywhere. I made it a goal to catch someone in the act of littering.

One day, driving along the Clearwater River, it happened. I was behind a pick-up truck when an arm jutted from the passenger window. I could see that the attached hand held a can of some sort and the arm made several bending motions, as if trying to aim for the perfect spot. Then the can flew from the hand and I caught my first litterer in the act.

Littering is literally a dirty business. It is unsightly and a shameful way to treat our public and private lands. Moreover, it is often dangerous for wildlife. That wildlife gets entangled in the plastic 6-pack rings is pretty common knowledge. Wildlife that get snared by discarded fishing line seldom survive the encounter. There are many instances of wildlife sickened by consuming trash or choking on our junk.

I am writing this on Earth Day 2018, themed, End Plastic Pollution. According to their website (earthday.org), “Currently about 300 million tons of plastic are produced each year to make bags, bottles, packages, and other commodities for people all over the world. Unfortunately, only about ten percent of this plastic is properly recycled and reused. The rest ends up as waste in landfills or as litter in our natural environment, where it leaches dangerous chemicals into the nearby soil and water, endangering humans and wildlife alike.” That is a pretty big deal and means that the littering of plastics is more than unsightly.

You might think that someone who enjoys the outdoors would be a big supporter of any anti-litter campaign. It has been my experience though, that hunters and fishermen are some of the worst offenders. River banks often resemble landfills, covered in the detritus of fishing. Bait containers, cans, bottles, baby diapers, wads of fishing line and more are common litter items that fishermen leave.

I have been in many hunting camps where a lot of trash was left behind but that isn’t the biggest problem. For hunters, it is target shooting. Granted not all target shooters are hunters, but all hunters are target shooters. Shooting glass objects, leaving targets behind and failing to pick up spent rounds all contributes dramatically to litter and has consequences too.

A few years ago, the BLM cleaned up the area of public land north and west of the Menan Buttes. It had become a dumping ground for those too cheap to use the landfills and target shooters, seeing this, left their own mark. This effort cost many thousands of taxpayer dollars and in the end, the area was closed to target shooting altogether.

I think virtually all of us have littered at some point so this may be a bit self-righteous. I remember times when both doors of my truck were opened at the same time and the wind grabbed all the candy wrappers carelessly deposited on the seat and spun them out of the truck and into the air. We sometimes didn’t recover all those wildly gyrating wrappers, thus becoming part of the problem, albeit unintentionally.

We can all do a better job at reducing litter. If we care about our public lands and the opportunities they afford, we should take better care of them.