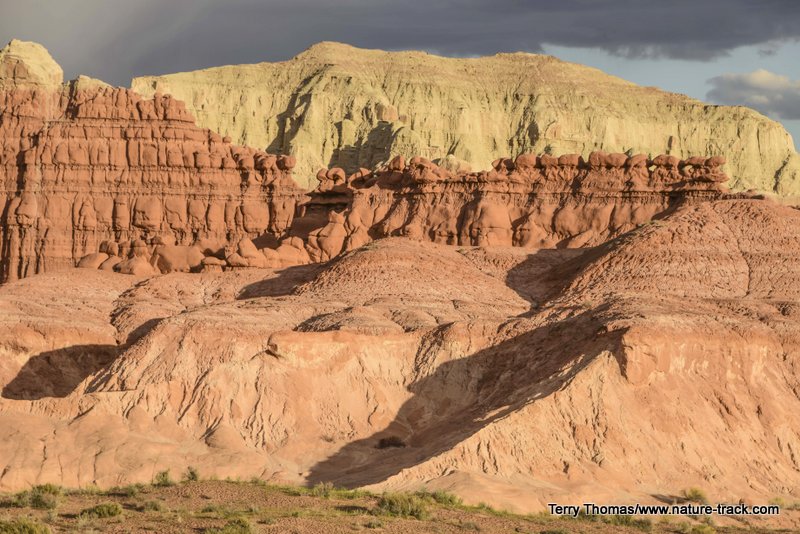 Southern Utah, like here at Goblin Valley State Park, is one of the best places to observe the raw effects of both wind and water erosion on the landscape.

If there is a word in the lexicon of ecological terms that seems to always be associated with negative consequences, it is erosion. The silt that comes from erosion is often recognized as the number one pollutant in waters that otherwise might be pristine. We are warned about erosion if we cut switchbacks on a trail. River banks erode causing property loss, damage to facilities and widen the river channel. Annually, millions of dollars are spent to reduce erosion alongside road construction projects.

There is another side to erosion though. Erosion is also the grand master of sculpting landscapes, creating art of the very earth itself. Places admired for their awesome grandeur and unique beauty, places we often revere as national parks, owe their existence to erosion. Think of Bryce, Zion’s, Arches or Grand Canyon national parks. We would never know their names if not for erosion.

Water and wind are the elemental agents of erosion. Working separately or together, these seemingly fluid forces can whittle mountains into hills, streams into chasms and sandstone into shapes.

Erosion is an irresistible force and virtually everything eventually succumbs to it. Softer surfaces yield quickly and erosion can rapidly create astounding designs or remove features all together.

Harder, more resilient surfaces erode more slowly. Hard is a relative term though and the erosive force will follow the path of least resistance, seeking out the softer materials. It carves out the softest rock and soil and shapes and smooths the harder stone. In the process, it creates holes and arches, hoodoos and slot canyons, and massive buttes and mesas.

Sometimes erosion is simply a workhorse. It grinds up parent rock grain by grain and sends it downslope. Millions of years ago, what we now call Great Smoky Mountains National Park was a range of granite peaks far higher than today. Once tectonic pressure stopped pushing them upward, erosion, helped out by freeze-thaw cycles and likely glaciers, dismantled the tops grain by grain, grinding them down to stunning rounded hills, the highest of which is around 4,000 feet ASL. Bit by bit, the mountain tops end up in the valleys creating deep fertile soil. The Teton Range is in the same process and a couple of million years climbing the Grand may be a stroll not a technical climb.

The river drainage erosion that we are so quick to condemn is also the process by which wildlife-rich river deltas are formed. Sediment rolls downstream settling out only as the river slows to discharge into an ocean or lake. On larger river systems, these deltas may cover many square miles and help to protect shorelines from ocean-bred storms.

If erosion teaches a virtue, it is that of patience. A dripping spring has little effect when observed in a human lifetime. But over the course of many millennia, this same drip carves a canyon, one flake of rock at a time. Windblown sand abrades slowly through eons, wearing through the surface until, one day, all that is left is an arch of rock, a hundred feet tall and equally wide. And although we can’t see it or even measure it, the same processes continue today. Our monuments are tomorrow’s ruins.

When great sculptors are listed, Erosion is not likely to be among them. But the finest monuments in the world are beholden to this relentless shaper of the surface of the earth.