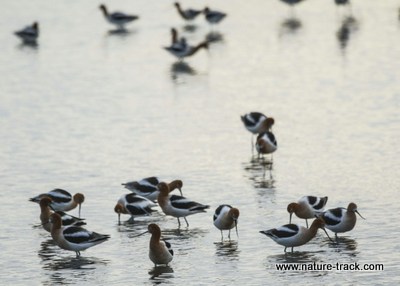 Whether they are called shorebirds like these avocets, wading birds, waterfowl, marshbirds or just plain waterbirds, the birds gracing area marshes right now are worth taking time to see.

Avocets, willets and sandpipers all shared a flooded field near Roberts with white-faced ibis, Franklin and California gulls. This eclectic mix was all feeding on invertebrates that were trying to escape the sheet of water several inches deep in places. These birds and many more share two commonalities: a love of water and hence the name, waterbirds.

Broadly defined, waterbirds are birds that are tied to water for some essential portion of their lives. They may feed in water or along water’s edge, they may breed in water and/or make their nests on or over water. That expansive definition actually makes bedfellows of a wide array of species drawn by a commonality of habitat rather than ancestry.

Waterbirds are further characterized by the way they forage. This introduces some other terms that are frequently used but seldom defined.

Seabirds are ocean-loving birds. They spend most of their time foraging over the open ocean and some may see land only during nesting season. This group includes frigate birds, albatrosses, shearwaters, boobies and puffins.

Waterfowl include the ducks, geese and swans. They may be dabblers that feed in shallow water or divers that hunt for food well below the surface. These are the species sought after by hunters and are considered poor to excellent table fare depending on species, locale and preparation. Waterfowl are not colony nesters like many other waterbirds.

A word commonly batted around this time of year is shorebird. Shorebird migration is really ramping up right now as shorebirds are heading toward northern breeding grounds. Shorebirds forage along very shallow water and mudflats. Their legs are longish, often as long as their bodies. Most have elongated beaks suitable for plying in mud and searching just beneath the surface. Sandpipers, avocets, black-necked stilts and willets are examples. Long-billed curlews are the largest members of this group.

Wading birds are the long-legged beauties that are a joy to watch. Egrets, herons, ibis, spoonbills, storks and more are all generally grouped as wading birds. These birds are usually fairly large, with legs longer than their bodies and very long bills. They will wade in water that would drown a shorebird and stealthily hunt for prey including fish, frogs and invertebrates.

Marshbirds are secretive or inconspicuous birds that are often easier to hear than to see. They form solitary nests, not colonies. Some authors include loons, bitterns, non-colonial grebes, rails, gallinules, coots, limpkin, and cranes in the marshbird category. In a way this seems to be a catchall for species that don’t readily fit into the other groups as some do not prefer the emergent wetland habitats known as marshes.

If that is not confusing enough, the North American Waterbird Conservation Plan focuses on seabirds, coastal waterbirds, wading birds, and marshbirds. Shorebirds and waterfowl have their own conservation plans.

Shorebird, waterfowl, wading bird or secretive marshbird, they will put on quite a show for the next month. Be sure to get out to a local marsh and enjoy it while you can.