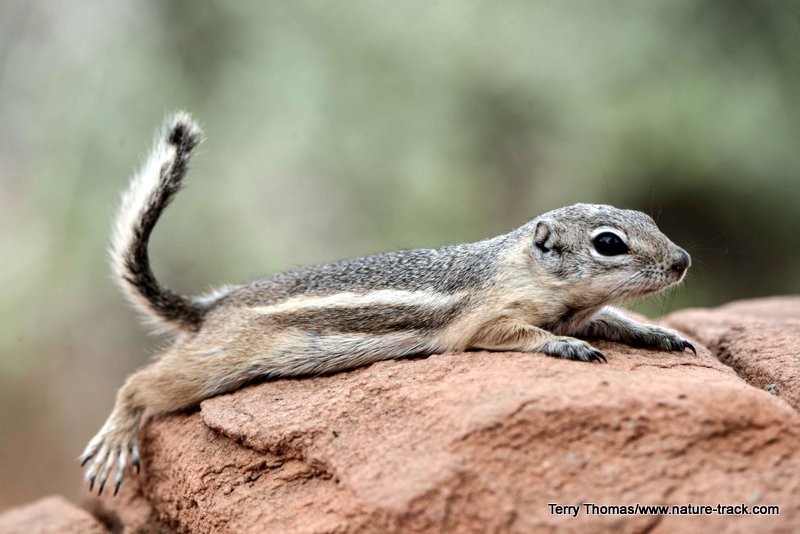 After checking for danger, a white-tailed antelope squirrel takes a break from its busyness and stretches out on the sandstone of Valley of Fire State Park in Nevada.

Like many people, cute animals find a real soft spot with me. It really isn’t fair, but a lizard or turtle just doesn’t create the same emotional response as a cuddly mammal. I rediscovered this character flaw (wildlife biologists are supposed to be immune to emotions when it comes to wildlife) as I watched a white-tailed antelope squirrel scurry about our camp at the Valley of Fire State Park in Nevada.

White-tailed antelope squirrels are the smallest of the ground squirrels, perhaps a smidgen larger than a chipmunk, which it resembles. The white-tailed antelope squirrel has a single white stripe that runs from shoulder to hip on a gray-brown body and a whitish eye ring. Unlike the chipmunk, there is no white stripe on the face or black stripes on the body and the external ear pinnae don’t stick up above the crown of the head.

The white-tailed antelope squirrel sports a short tail, only about half its body length, where that of the chipmunk is as long as its body. This tail is, of course, white on the underside and like all antelope squirrels, it carries the tail arched forward and laid out tightly on its back.

All this frenzied running, jumping and scrambling can abruptly stop when the white-tailed antelope squirrel feels safe though, and perpetual motion changes to languid serenity. After standing on their oversized back feet to check for danger, they may stretch out on a rock, acting like sunbathers on a beach, and just as relaxed.

Like many ground squirrels, white-tailed antelope squirrels are diurnal, meaning they are active during the day. They tend to rest during the hottest part of the day, often retreating to their burrows. In the desert environments where all species of antelope squirrels live, many predators are most active at night when it is a little cooler. Daytime activity is an adaptation to reduce predation.

Antelope ground squirrels are omnivorous, with diets following availability of food resources. During the springtime, up to 60 percent of their diet is green vegetation. As summer progresses, seeds and fruits become increasingly important. However, they are also predators themselves, eating large numbers of invertebrates. White-tailed antelope squirrels are even more carnivorous than the other species and will eat small lizards and even baby mice.

As desert dwellers, antelope squirrels are active year-round, not hibernating like many of their ground squirrel cousins. During winter time, they rely on stored seeds for much of their diet but will still forage above ground as needed.

White-tailed antelope squirrels inhabit arid regions from southeastern Oregon to northern Arizona and New Mexico and south through the entire Baja Peninsula. However, in Idaho, they are found only in the far southwest corner of the state, mostly along the Snake River.

We may see the range of the white-tailed antelope squirrel expand north and even eastward with climate change. I would enjoy having these cute little guys a little closer to home.