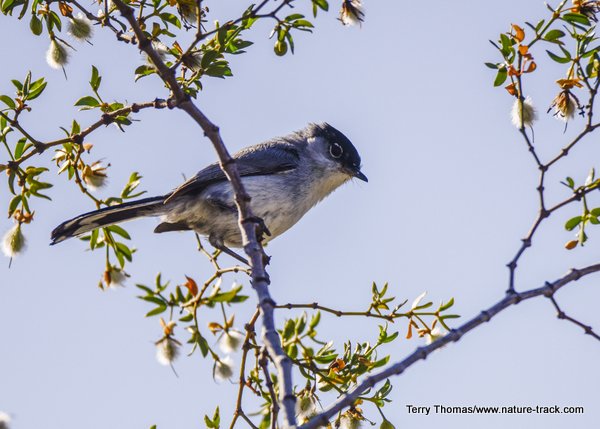 In the excitement of seeing a wild critter, it is often easy to forget to look for the details such as the white eye-ring and white spots under the tail on this black-tailed gnatcatcher, that help to identify it as well as add enjoyment to the experience.

While I put a few miles on the treadmill, I watched a YouTube video of a guy carving a bear with a chainsaw. In real-time of 21 minutes, a block of wood was transformed into the remarkable likeness of a standing bear. It was simply amazing. I watched carefully as he explained the details, such as ear placement, that were important to the final product. I got to wondering if I had ever noticed just exactly where a bear’s ears are placed on the head. Could I get that right without looking at a reference photo?

My home is full of wildlife carvings, paintings, ceramic figurines, brass castings and metal cutouts of wildlife. I love to collect things like that. Some are less detailed than others but all in all, they are great representations of wildlife. There are a lot of artists out there who can, with just about any medium, create realistic art. That comes from observing details.

How many times though, have I been guilty of looking without really seeing? I know that when I see an animal, I am usually so excited and reaching for a camera that I suffer from tunnel vision where I see nothing else including other animals and hazards such as traffic. Am I missing other things as well? I suspect so, because I often have to take a second or even third look, if the animal affords me that opportunity, to finally correctly identify it.

This is particularly true when birding. Small details such as a white eye-ring, a pale cheek patch, a spot on the throat or other small but important clue is easily missed if I am not paying attention to details. But it goes beyond that. When I am looking at a species I can readily identify, I tend to see the whole bird and not the distinguishing characteristics that make it so.

The devil might be in the details but so are the differences between species and often the true art of nature. When I took an Ichthyology class many years ago, we were faced with a final exam of over 170 fish specimens, all bleached to a gray white by the preserving liquid. With no color as clues, we were forced to look closely at each specimen to determine its species. On some of the spiny-rayed fish, it was a matter of counting spines and rays in the dorsal fin. The distinction between a largemouth and smallmouth bass was largely whether or not the corner of the mouth ended in front of or behind the eye. For still others, we had to look carefully at the lateral line, body shape, number of fins (all trout species have an adipose fin between the dorsal and tail fin), mouth type and a number of other clues. I was thrilled to have a near perfect score, only being fooled by a trick question.

Identifying wildlife, their sign or their lifestyle is often all about the details. If you see a duck with feet in the middle of the body as opposed to feet far back on the body, you know that it is a dabbling duck and will take to the air in a bound and will walk well on land. If you note that the feet are far back, you know that you are looking at a diving duck, one that can swim well underwater but for whom take-off and walking on land are a chore. But you have to see the details, not just the duck.

Detail. That is what I need to start paying more attention to. I know if I do, my experiences in the natural world will improve.