Trash Wildlife? There’s No Such Thing

The house mouse lay dead behind the washroom door for probably a week. The trap that had caught it was part of a small line of traps intended as a preemptive strike against an occasional incursion and not regularly checked. I flushed the little gray body down the toilet without a glimmer of remorse and looked to see how many hobo spiders were attached to the spider trap behind it.

Like many people, I have zero tolerance with mice and hobo spiders in my abode. However, that is very different from having no respect for them. Both of these have a place in this world; it just isn’t in our houses.

I do know a number of people however, who have absolutely no use for one species of wildlife or another. I once heard the president of a respected livestock organization state emphatically that if it were up to him, there would be no elk in Idaho. I have heard hunters question the need for any kind of wildlife that isn't harvested by humans. I have more than one neighbor who thinks the world would be better off without magpies. Another thinks that no rodent deserves a modicum of respect. Fishermen even have a name for species like suckers and chubs that they perceive as competing with trout: trash fish—and they summarily toss them onto the bank with scorn.

The concept of trash wildlife suggests that a species is bad and worthless—all the time and in all places and the world would be better without it. That is a curious position because one man’s trash is truly another’s treasure when talking about wildlife. If you ask suburbanites in the eastern U.S. to name their biggest trash wildlife, the answer might surprise you. It is the same animal that is highly prized elsewhere: the white-tailed deer. So, just what is trash wildlife?

It seems that just about every species of wildlife makes it onto someone’s list. Apex predators such as wolves, coyotes, and foxes, are commonly despised because of their potential to compete for other wildlife that humans like to hunt. Elk, deer, pronghorn antelope, and moose can damage standing and stored crops, raising the ire of farmers.  Weasels and hawks eat chickens, snakes scare us, and mischievous  raccoons steal eggs and tip over trash cans. And the complaints are always followed with, “What good are they, anyway?”

I suggest that there is no such thing as trash wildlife—wildlife that has no value. That mouse that died in my trap would have made a tasty meal for a weasel, a kestrel, or a saw-whet owl. The spiders on my glue traps help control other invertebrates that, if left unchecked, could get out of hand. Everything has a purpose and a place, everything is interconnected.

Wild things can get out of balance and require management at times, but that is far different than worthless. The recent feature in the Post Register on the 1981 Mud Lake “bunny bash” bears this out. When black-tailed jackrabbit populations soared to more than one rabbit per acre, farmers fought back to save their crops, killing from 250,000 to one million rabbits.  I might be okay with that. What I take offense to was the organizer’s comment: We aren’t talking about Peter Cottontail. These are desert rats. That’s all they are.”  He couldn't be more wrong. 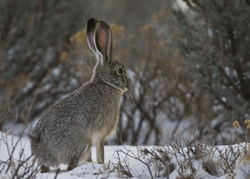 Black-tailed jackrabbits are an integral part of the desert ecosystem, and are part of an elaborate foodchain. They are not “trash” wildlife.