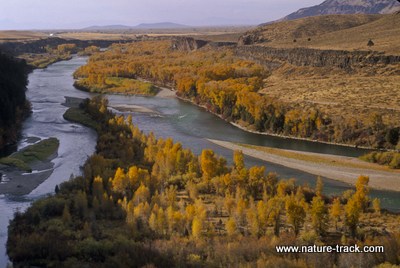 The cottonwood forest along the South Fork of the Snake River is to wildlife what Everest is to mountains. But this national treasure may one day blink out because of efforts to constrain it.

A national natural wonder is beginning to yawn and stretch in our backyard, waking slowly to begin yet another season. The narrowleaf cottonwood forests along the South Fork of the Snake River are 66 miles of some of the most unique and biodiverse habitat in the West and the largest cottonwood forest in the United States.

This giant forest has been loved to death, carved up, subdivided, robbed of water, constrained and treated like an enemy of progress, yet it has survived. Conservation easements have protected many acres from further development and engaged landowners are learning how to treat the forest and associated river banks with respect.

Despite the good work that has been done to safeguard the forest home of 126 species of birds and dozens of species of mammals, the South Fork is still shackled to the wall of Palisades Dam, and that may control the fate of the cottonwood forests.

Cottonwoods are short-lived species—ancient specimens are less than two hundred years old. What sustains the forest is the perpetual establishment of new seedlings that can grow into a forest with mature trees, brand new saplings and a host of age classes in-between. To accomplish this, they produce copious amounts of tiny seeds wrapped in wispy “cotton”. The seeds float around on the breeze hoping to land in favorable ground before their life force fails them.

And that is the rub. Because of the stringent control of the river imposed by the dam, seeds rarely encounter conditions where they can take root and prosper.  Cottonwood seeds need bare mineral soil in order to germinate and thrive and bare mineral soil is a rare commodity anywhere in a post dam river. Result: the forest ages without replenishing itself.

Two things constrain the creation of bare soil in the form of new sandbars, points and islands. First, the dam captures all the sediment from up river, allowing it to settle out before water passes through the turbines. That is the raw material the river would use to create the bare earth cottonwood seeds need.

The second constraint is water volume in the river. In 1996 a study concluded that in order to have sufficient energy to move existing gravels to create bare soil and consequently establish a new cohort of cottonwood seedlings, sustained river flows of 35,000 cubic feet per second are needed once every 15 years. Ironically, this occurred the year following the study. In 1997, flows on the South Fork reached 48,000 cfs—a boon for cottonwoods and a nightmare for humans.

The Law of Unintended Consequences started working overtime when the gates to Palisades Dam first closed in November 1956. And it has put us in a quandary—floods are bad for landowners who have built within the floodplain, but essential for the long-term health of a national treasure. Can there be a win-win here or will the forest ultimately lose to progress?