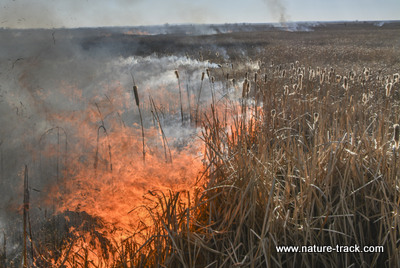 While cattails provide terrific habitat, they can also get out of hand, and actually need to be managed routinely.

As spring advances, wetlands, like other habitats, will transition from brown to green. While there are a number of wetland plants that will contribute to this, none is more prevalent than the cattail.

Cattails come in 30 different flavors around the world, but for the most part, three species make up the bulk of the cattails in North America: broad-leafed, narrow-leafed and southern cattails. Of these, the broad-leafed cattail is the most widespread, native in 49 states and all Canadian provinces and the Northwest Territories and introduced in Hawaii. It is also found in Mexico, Great Britain, Eurasia, India, Africa, New Zealand, and Australia.

All three of these native species hybridize readily. They also essentially fill the same niche and have similar habitat requirements and life histories so I will refer to all three simply as cattails.

Cattails are easy to recognize. They are perennial plants like bulrushes and sedges, other common marsh plants. Unlike the hollow tubes common in the bulrushes though, cattails have long flat leaves with parallel veins. Leaves may be three to six feet long and are extremely fibrous. The central stalk of the cattail bears a seed head that is often referred to as a “cob”. On top of the seed head is a spike where pollen forms and is distributed by the wind. Each “cob” can produce from 100,000 to a quarter of a million seeds.

That heavy seed production is one reason for the success of the cattail. Each seed has bristly hairs that help it float considerable distances on the wind. Cattail populations can be found in many isolated locations though, far from the influence of the wind. It is likely that birds also inadvertently help in seed dispersal by carrying seeds stuck to their feet and feathers and “planting” them along their migration routes.

Cattails may become established by seed, but colonies are maintained by vegetative reproduction. They are strongly rhizomatous, sending out lateral shoots that create thick stands of nothing but cattails.

These thick stands are valuable for hiding and nesting cover for a wide variety of birds. Muskrats consume the cattails and use them to build feeding platforms and dens that are in turn used as resting places for waterbirds. Despite their value though, cattail marshes are often victims of too much of a good thing.

Even though they are native species, cattails have such a wide niche that they are strong competitors for just about every other species of wetland vegetation. They can quickly form monocultures of impossibly thick vegetation that impedes biodiversity and chokes out open water.

Marsh and wetland managers routinely have to control cattail invasion to maintain diversity and open water. Techniques include burning to reduce the build-up of plant debris, disturbance such as heavy disking to reduce the number of plants and chemical control to maintain areas of open water. Water level management is also a valid tool, but is often impractical because of cost or just not enough available water.

There is one more thing to know about cattails. They add more to a springtime marsh than color. Young growing cattails are a one-stop grocery for wild plant enthusiasts who appreciate their abundance. Flour-like pollen, young flowering heads, tender stem cores and starchy rhizomes can all be harvested and made into tasty dishes.