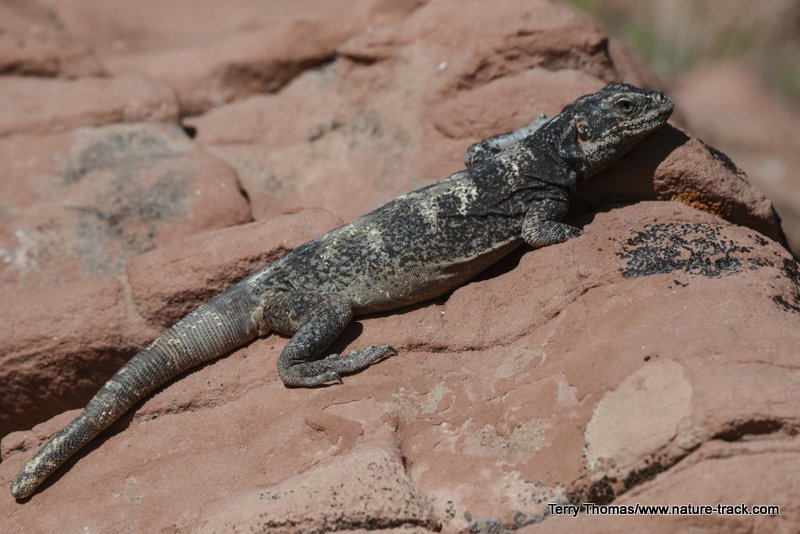 Lizards are a diverse group. If you want to see a lot of species though, you need to head to the tropics or the warmer deserts of the U.S. This is a Mojave Desert chuckwalla and is over a foot long.

The Mojave and Sonoran deserts are full of strange and wonderful wildlife. Their hot climates seem to especially favor reptiles and within a day or two in the Mojave, we had seen half a dozen species of lizards, perhaps the most common of reptiles.

Lizard species inhabit every continent except Antarctica and are found on most large island groups. They range in size from chameleons a few millimeters long that can change color to match their environment to the three-meter-long Komodo dragon, capable of killing a water buffalo.

As a group, lizards have been around for at least 220 million years and have had plenty of time to diversify. With over 6,000 species worldwide, it is easy to imagine that there is a lizard that breaks any rule man can establish for them. For instance, most lizards are predators, with specialists that hunt everything from insects to mollusks to mammals. However, the chuckwalla of the Southwest is an herbivore as is the iguana.

Unlike many snakes, lizards aren’t venomous, except when they are. The Gila monster of the Sonoran and Mojave deserts is the classic poisonous lizard. It was once thought that only one other species of lizard, the Mexican beaded lizard, was venomous but more recent research shows that several species of monitor lizards, including the massive Komodo, produce potent toxins.

Most lizards seem to consider their tail as a throwaway body part. When attacked by a predator, the tail can easily break off, leaving the predator with an enticing wriggling tail while the lizard makes its escape. After all, these tails can grow back, although they usually aren’t quite like the original ones. However, there are a number of species that depend on their tails for balance or even locomotion. Chameleons, for instance, have prehensile (grasping) tails that they use for climbing. Having it break off easily would be a definite disadvantage.

If one were asked what separates a lizard from a snake the temptation would be to respond, legs. Lizards have them and snakes don’t. In most cases, that is true. But in an example of convergent evolution, there are lizards, often referred to as glass snakes, that have lost their legs to make it easier to negotiate in their habitat. These legless lizards are different from snakes because the have functional eyelids, external ears and retain the ability to lose and regrow their tail.

Like other reptiles, lizards are ectotherms. They do not generate their own body heat, depending instead on the environment to do it for them. This alone marks lizards as daytime hunters where they control body temperature through exposure to the sun and shade. There are even exceptions here. Geckos, for instance, prowl the night.

Lizards can be found in almost any habitat. There are lizards living as high as 16,000 feet above sea level, lizards that live in trees and even a marine iguana that makes its home at sea. However, there are more in the tropics and deserts than other places. Idaho has only ten species of lizards and skinks. Only three species, the sagebrush lizard, the short-horned lizard and the western skink have ranges that reach to eastern Idaho.

That changes as you head to the Mojave and Sonoran deserts though. Nevada Natural Heritage program lists 25 lizards and skinks and Arizona sports 56 species, giving me all the excuse I need to spend more time south of the snowbelt.