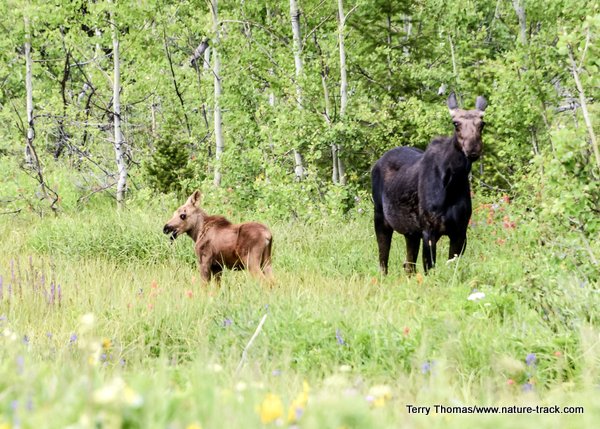 A cow moose and her calf in Island Park. Populations depend on strong recruitment of calves. Anything that impacts reproduction and calf survival will influence the population.

Last weekend I opened our back door one morning and stepped out onto the deck. Staring at me from about ten yards was a cow moose, gray and rough looking from the long winter. While moose in the yard are not uncommon here, this was the first one since late last fall, a sure sign that spring is on its way.

Moose are one of the most easily seen wild animals in Island Park and elsewhere around the Upper Snake area. According to the historical record, in both Idaho and Wyoming, such wasn’t always the case. Moose were rarely mentioned in fur trapper journals in southern and eastern Idaho. Moose were relatively unknown in the Jackson Hole and Yellowstone areas until after 1850. The first moose reported in Utah was in 1905. How moose finally got here is unknown but researchers suspect that they came from established populations in Montana.

Today, it is a different story and it isn’t news that moose are struggling. Idaho, Wyoming, Montana, Washington, Utah, Minnesota, Maine, New Hampshire, Vermont, Ontario and British Columbia all report declines in moose populations during the past two decades. What is causing the declines is perplexing and Idaho, Montana, Wyoming and Utah are all conducting long-term studies to see why moose populations are declining.

There are three ways to cause a population of moose to decline. First would be direct mortality of moose. Studies so far have found that liver flukes, arterial worms, elaeophorosis infection—(spread by horseflies) causing blindness, gangrene in the nose and damage to the central nervous system, chronic wasting disease and brainworm are all killing adult moose. Predators play a role in places—black bears and wolves take 70 percent of calves in Minnesota but not in others. For instance, southeast Idaho has few wolves but still has a declining moose herd.

A tiny external parasite is devastating populations in much of the east. The winter tick is a common parasite but when conditions, usually warmer winter weather, allow the ticks to survive, they can build up to devastating numbers. In New Hampshire and Maine, of 125 calves that died during a study, tick infestations caused 90 percent of the deaths. These calves had an average of over 47,000 ticks each and literally bled to death. This is concerning in the West (three of nine Idaho moose deaths—out of 112 marked animals—were emaciated with high tick infestations) but so far western states haven’t seen these kinds of infestations.

The second way for a moose population to decline is to impact reproduction. A study at Utah State University determined that maternal fat stores of an expectant mother directly impacted twinning rates (usually high in healthy moose), whether or not she would have a successful birth, and what condition the youngster(s) would be in when they entered this world. All of the above-mentioned factors can influence the reproductive ability of a female by decreasing her physical condition without actually killing her. So, a cow might have a liver fluke and a moderate amount of winter tick infestation, say 8,000 ticks, and be able to survive but not be able to successfully sustain a pregnancy. It might also weaken her just enough to make her vulnerable to predation.

Finally, a decline in habitat quality and/or quantity, can have a direct impact on moose numbers. Less habitat means fewer resources to be sure, which can impact reproduction. Without a large crop of healthy calves that survive to breed, the population declines through adult mortality. Shrinking habitat also brings moose into closer contact where the likelihood of spreading parasites and diseases increases. A population decline is often Nature’s answer to crowding, but if we tighten the habitat belt after each decline, this process doesn’t work.

These studies are likely to reveal that there is no single smoking gun causing a continent-wide moose decline. It is likely that multiple factors may combine to make the animals vulnerable. We may have already seen the glory days of this charismatic animal.