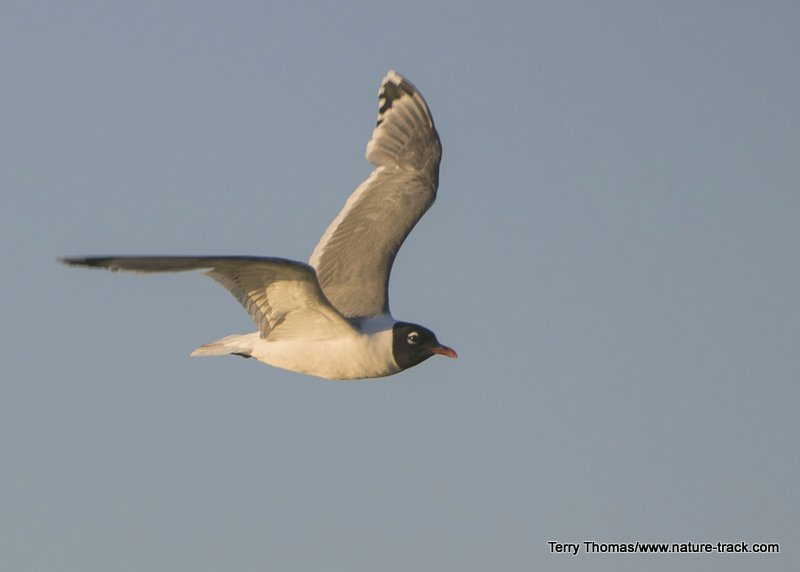 A Franklin’s gull at Market Lake WMA. During the breeding season the black head makes this gull  one of the more easily identified of the gulls.

In 1955, the state of Utah officially recognized the “sea gull” as the state bird in recognition of how flocks of gulls saved pioneer crops from a plague of locusts in 1848. Over time, the California gull has become universally recognized as the bird referred to as the “sea gull”, but the legal statute has apparently never been changed to this day.

Having grown up in Utah, I doubt I will ever completely expel the word, “sea gull”, from my vocabulary. Today though, these birds, members of the family, Laridae (along with terns and skimmers), are referred to collectively as gulls. The family Laridae has 98 species worldwide and they breed on every continent, including Antarctica. My Sibley Guide to Birds shows 27 gull species in eight genera in North America.

Identifying gulls, particularly those of the genus, Larus, or the white-headed gulls, is a challenge. Gulls show a preference for water, hence the original moniker, sea gull, but can be found just about anywhere. Gulls almost always nest on the ground near or over water in emergent vegetation such as cattails or bulrushes, in colonies of up to several thousand pairs. They are especially attracted to places like trash dumps, so inland areas may still have gull populations so long as nesting habitat is close by.

It is a temptation to describe gulls in general as white birds but that would be misleading. There is only one truly white gull, the ivory gull, which, like polar bears, spends the bulk of its time on the pack ice of the Arctic.

Gulls are substantially white and gray, but that doesn’t do much to separate them from many terns, which are also largely white and gray. Terns though are typically smaller, slenderer and have narrow pointed wings.

Accurately identifying gulls is one of nature’s great challenges. They can be quickly recognized as gulls, but which species? Many of them look very similar and often take an expert to reliably identify.

Besides adults that look similar, gulls are long-lived species that take 2-4 years to mature. At each stage of maturity, the birds look a bit different, often not well representing the adult plumage they will end up with but resembling a number of other gull species in juvenile plumage.

To further complicate identification, many gull species are closely related and readily hybridize. As expected, hybrids tend to look like both their parents, turning identification into conjecture and argument confusing even competent birders.

Start with location to narrow down the field to identify a gull. If you see a dark-backed gull with a yellow bill at Market Lake, you can quickly realize that it isn’t likely to be a yellow-footed gull which is found exclusively on the Baja Peninsula or a lesser black-backed gull which is found east of Colorado. The range maps in your bird book are invaluable as a starting point.

I hate to be a pessimist, but beyond that it can get tough in a hurry. There are details such as “slightly larger than” or “slightly darker than”, but frankly, if there isn’t something to compare them to, these features are of little value. Pay attention to detail and take your best guess.

Last week we looked at some gulls on the lake where we were camped at. My wife quickly identified them as California gulls. We wrote it down on our list, happy with our skills. After all, who is going to say different? My only other choice is to just lump them all as “sea gulls” and let it go at that.