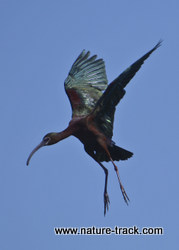 White-faced ibises struggled when their colonies were flooded by the Great Salt Lake in 1983. Fortunately, they were able to pioneer into new available habitat in eastern Idaho.

The sun was barely over the horizon when waves of white-faced ibises rose off Market Lake Wildlife Management Area like mosquitoes from a swamp. As they gained altitude, each chaotic roil of birds formed into an organized "V" shape and the birds were off to forage for the day.

In the evening, I knew I would enjoy their flights from my home as they passed high overhead on their return trip to the marsh.

The white-faced ibis is a medium-sized, long-legged brown bird that glows with iridescent blues and greens. It sports a long downward curving beak for probing in wet meadows and flood irrigated fields for invertebrates such as worms. It is a member of the Threskiornithidae family which also includes spoonbills. There are 33 species in the family worldwide, of which about 25 are ibises.

In North America, the white-faced, glossy, white and scarlet ibises are the most common, mainly in the southeastern U.S.

Eastern Idaho is at the extreme northern edge of the range of the white-faced ibis. Yet, the Idaho Department of Fish and Game reports that with over 16,000 nests each year, the colonies at Market and Mud Lake wildlife management areas comprise one of the largest breeding concentrations of white-faced ibis throughout their range.

It is a big deal, but it wasn't always the case.

As the story goes, prior to the 1980’s, white-faced ibises didn’t breed in eastern Idaho in appreciable numbers. In 1983, a rising Great Salt Lake breached the dikes around Bear River National Wildlife Refuge and the salty water rushed in. It took six years for the waters to recede to the point where restoration could start.

White-faced ibis colonies at the refuge needed a new place to breed and raise young. They quickly pioneered into eastern Idaho, establishing colonies that have been thriving since.

Eastern Idaho was always important to breeding ibis; they just didn't know it until their former breeding ground was destroyed.

There is a central conservation lesson in the story of the ibis. As the famous line from the movie, “Jurassic Park,” reminds us, "life will find a way".

Over my career, I have been impressed with how well wildlife can adapt to the challenges nature or humans create. For instance, white-tailed deer, raccoons, skunks, foxes and coyotes have all learned to thrive in urban environments.

When the ibises lost colonies in Utah, they didn't just give up and die. No, just like our own ancestors, they pioneered into new habitat, adapted and carried on.

The lesson for us is this: wildlife will find a way, so long as we continue to provide them room to do so. Where wildlife management will fail is when there are no options, no flexibility and no choices left.

Various catastrophes, changing climate and an expanding human footprint will continue to buffet wildlife populations. And for the most part, they will continue to respond, molding and shaping their populations and lives to the new circumstances, so long as we are careful to never manage with the sideboards too tight.