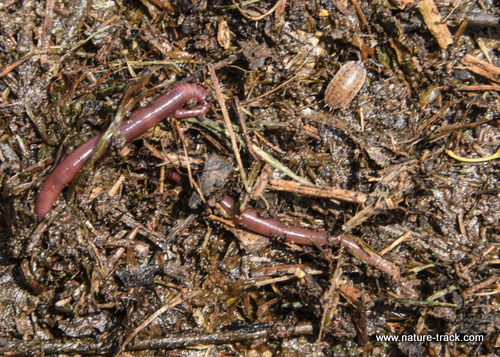 These little soil building invertebrates are real heroes but are seldom thought about or appreciated.


Memorial Day weekend found me attending to much needed yard work. Job one was replacing some old bark spread out on weed fabric. As I scooped the bark up, I immediately became aware that much of it, along with several years’ worth of sunflower hulls from my bird feeders, had composted into soil on top of the fabric. I changed tactics and with the help of my shop-vac, removed the loose top layer and reused it as bedding. Then I happily shoveled the rich new soil, some of it up to three inches thick, into my vegetable garden.

As I worked, I noticed dozens of earthworms, nematodes, pill bugs, mites and other tiny creatures thriving in this new layer. A hand lens revealed even more creatures and had I had a microscope, the compost would have literally looked alive with bacteria, fungi and Actinomycetes. The bacteria are so small that 25,000 lined up end to end would barely cover an inch.

Altogether, these tiny creatures from my little area wouldn’t have filled much more than a cup or two (a full acre of healthy moist soil will contain about 3,000 pounds’ worth). Yet they and their unseen counterparts had just done something that I could never do. Through chemical processes and mechanical chewing, tearing and excreting, they built soil from bark. Soil—the very basis of life on earth for all more sophisticated animal life.

The little guys of this planet are heroes in their own right but they certainly don’t get enough credit for the ecosystem services they provide. Most often, we only realize that they exist when we are at odds with them. For instance, I am currently in a battle with tiny sugar ants that are intent on removing all the sand I had so carefully placed beneath my patio bricks and putting it on top of the bricks. The once smooth surface now resembles cobblestone and is about as easy to walk on. I am certainly aware of those ants and if Colorado potato beetles find their way to my yard again, we will notice the impacts on the garden.

Yet, invertebrates from all phyla make up 95% of the animal life on this planet and without them life as we know it would not exist. Besides building soil, invertebrates are largely responsible for pollination of most of our food crops. Some plants, such as tomatoes, have evolved to require very specific pollinators (bumblebees in the case of tomatoes) not easily mimicked by human ingenuity.

Invertebrates are also at or near the bottom of the food chain. They provide the vital energy that keeps the engine of the rest of the complex web of life stoked and burning.

These are things to think about when applying fertilizers, herbicides and insecticides to yards and fields. Lawn companies and nurseries would have you believe that killing every insect, grub and spider is the best thing we can do for our yards. In reality, indiscriminately killing the soil fauna and other invertebrates is seriously counterproductive.  Learning to be a little more tolerant and selectively targeting problem areas instead of carpet bombing the entire yard will build and keep a system intact that can take care of itself.

We need to remember one thing: we may rule the world, but we are in turn ruled by it, and those little guys, the ones we seldom see, are the ones who really hold the scepter.