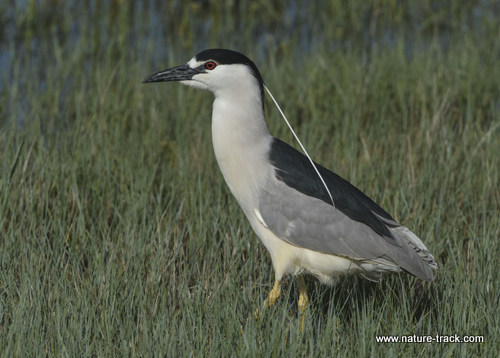 Black-crowned night herons can be seen hunting during the day in the spring as they look for extra calories for the breeding season.


Hunters prowl the skies and the marshes at Market Lake WMA, making it a very scary place to be a mouse, fish or an invertebrate. Short-eared, long-eared and great horned owls, harriers, ibis, cormorants, gulls, avocets, black-necked stilts, osprey, bitterns, and more all vie for protein packaged as prey species. Most of the predators target a fairly small spectrum of prey. Owls and hawks are largely mousers. Cormorants fish, avocets and stilts hunt for small invertebrates.

There are a couple of generalists out there though, and from them no prey is safe. These are the herons, the lanky great blue heron and its stubby cousin, the black-crowned night heron. As a rule, the great blue heron reigns by day and the black-crowned night heron hunts by night, thus partitioning the resources to reduce direct competition. For them, anything they can swallow or break into pieces is fair game: frogs, mollusks, fish, mice, eggs, snakes, nestling birds, insects, worms and even carrion are on the menu.

The black-crowned night heron looks little like its long-legged and long-necked cousin.  Males and females are similar: short, perhaps 18 inches tall, and stout-bodied with the male being slightly the larger of the two. They are white underneath with gray wings, black crowns and backs. Two ruby eyes are set beneath the black cap, yolk yellow legs suitable for wading stretch out and they have almost no tail.  A thick black bill completes the look except during breeding when three feathers on the back of the head grow out to almost a foot in length.

The night heron almost looks like two different birds, depending on if it is hunting or resting. At rest, the neck is pulled down and it appears that the heron’s head rests directly on its shoulders. When hunting though, the neck is outstretched and the bird looks streamlined and not stubby.

Besides the great blue heron, the black-crowned night heron also counts as first cousins the green, yellow-crowned, tri-colored and little blue herons but these are seldom seen in Idaho. Second cousins include the bittern and the egrets, several of which can be seen at Market Lake. However, the black-crowned heron is found throughout most of the continental U.S. and southern Canada. Members of the species nest on every continent except Australia and Antarctica.

Like most members of the heron family black-crowned night herons are colony nesters. The male begins the nest and then advertises for a mate with a series of bows and by raising the plume on his head. Once a mate is secure the couple completes the nest. Both share in the incubation of the eggs and the brooding of the helpless chicks, hunting and defending the nest from predators and inquisitive neighbors.

If reincarnation were an actual fact, coming back as a black-crowned night heron might be a good choice. They are handsome top predators that seldom go hungry!